Tesla produced nearly 510,000 vehicles in the last crisis year. The automaker faced a global semiconductor shortage in 2021 and its second-quarter shipments fell short of analyst average estimates. Will Tesla get close to the new milestone of 1 million electric vehicles produced?

If we look at the chart of Tesla (TSLA) shares 5 years ago, we can see that at that time very few people believed that in 2020 Elon Musk’s company would become the most expensive car company in the world by market capitalization ($ 654 billion as of 5.07 .), will be added to the benchmark S&P 500 and will produce more than half a million electric vehicles per year.

Below is a graph of the rise in Tesla stock since the second half of 2018.

In a fairly short period, Tesla was able to build automated lines and ramp up production, and the launch of the first overseas plant in Shanghai increased the company’s total production by almost a third. The growth was fueled by Tesla’s record of positive cash flow, which allowed the company to invest more in expanding its capacity.

Tesla has installed enough new production lines during the past year to increase its manufacturing capacity by more than 60%.

These expansions at both the Fremont (USA) and Shanghai (China) plant have resulted in Tesla’s estimated 1.05 million vehicle production capacity at the start of 2021, which sets the stage for further incredible growth of the company.

How Tesla’s production and sales grew

During the crisis year of 2020, when Tesla had to close its factories due to the COVID-19 pandemic, and then due to quarantine measures, it did not work at full capacity, the company still managed to increase shipments by 36% to 499,550 vehicles.

Marketinfo.pro has collected statistics of sales (deliveries to customers) and production from the 2nd quarter of 2019. 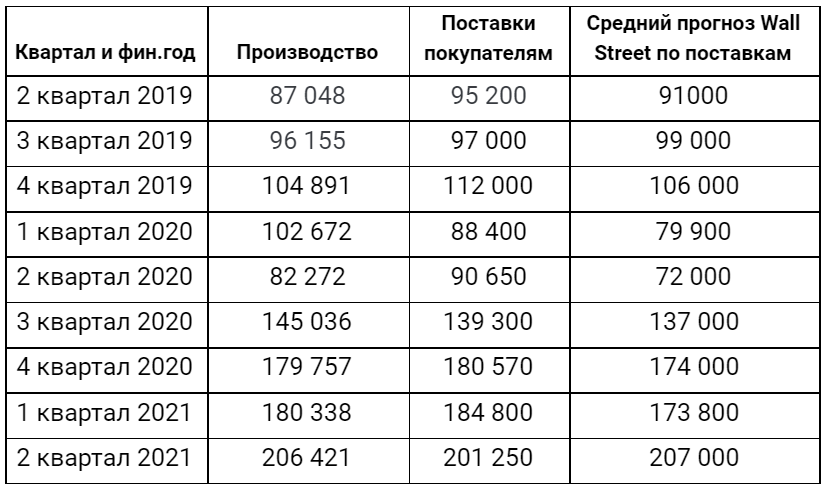 Wall Street forecasts for Tesla shipments in 2021 averaged 797,000, up 60% from 2020. At the same time, production may well reach or approach the 1 million mark, given that in the first half of this year Tesla has already produced almost 387,000 cars. Investors will not see smooth growth due to temporary plant closings in 2020, but if we compare the figures of the last quarter with last year’s we will see more than double growth.

Tesla’s sales forecast statistics (the last column of the table above) show that the company exceeded market analyst estimates in eight of the nine quarters.

Skeptics who still have doubts about Tesla’s prospects should consider the expected opening of two new factories later this year – in Texas and near Berlin, Germany. The factories will not immediately reach full capacity, but over the next year they can significantly increase the company’s production rates.

Tesla shares are up 180.85% over the past year, but their value is down 3.8% since early 2021, in part due to concerns about limited chip supply as global manufacturers face a global shortage of semiconductors.

US labor market may fully recover pandemic losses in 7 months