Over the past two trading sessions, VTB shares have shown very mixed dynamics. Last Thursday, the share price rose above two levels of technical resistance, but by the end of the day it returned back. Buyers’ strength is decreasing, as can be seen from the candlestick formations of the last two daily candles. Oscillators Bears and Bulls power also confirm this.

Now the price has returned to the lower border of the medium-term ascending channel. The technical picture became neutral at the moment. The situation is aggravated by the negative external background emerging this morning. If his pressure continues, it is possible that it will drop below 3.8 kopecks, which will open the way to 3.75 kopecks. At the same time, such a decline is not yet regarded as a change in trend to a downward one.

If the positive external background recovers, buyers will need to return to the 3.84 kopeck test. Fixation above the designated level will serve as a signal for the return of the upward trend with guidance above 3.9 kopecks. In the medium term, this is technically possible.

A breakdown of the level of 3.68 kopecks may indicate a change in sentiment. from top to bottom, where the 200-day moving average is located slightly below. In this scenario, the benchmarks may fall below 3.6 kopecks. 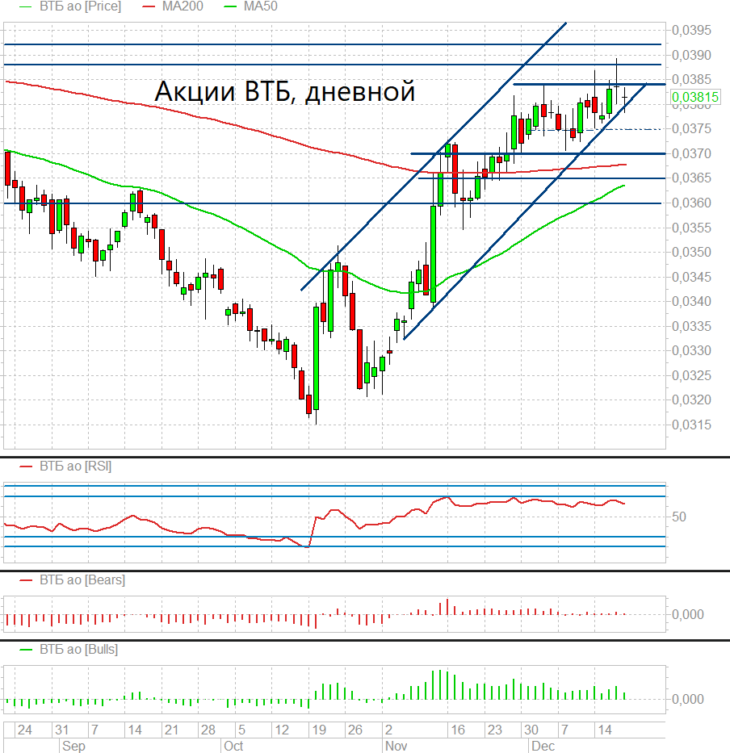 The external background is negative this morning. American indices after the close of our daytime session on Friday remained at about the same levels. Asian sites are currently trading mostly in negative territory. Futures on the S&P 500 index in the morning are down 0.12%, contracts for Brent oil are in the red by 2.3% and are around the level of $ 50.7.

Taking into account the results of the previous evening trades, it can be assumed that if the current background persists, the opening on VTB shares will go below the level of Friday’s close.

Since mid-March, VTB shares have been in an upward trend. It was interrupted at the beginning of August amid a decrease in dividends from 50% to 10% of net profit. The market reacted with a sell-off, which led to the formation of a downtrend, and the price was close to March values.

Until mid-October, VTB shares continued to decline, until the company announced its intention to pay 50% of its net profit for 2020 – the news became an excellent driver of the share price growth.

The 50- and 200-week moving averages began to signal a reversal of the curves towards neutrality. MACD curves continue to show the formation of an upward trend. The RSI indicator is slightly above the neutral point (50).

The return to previous dividends remains a significant growth driver. To continue the upward trend, it is necessary to gain a foothold above 3.9 kopecks, this will open the way to levels above 4 kopecks. Quotes consolidated above the level of the 50-week moving average – 3.7 kopecks. – a positive signal for continued growth. Taking into account technical signals, the scenario of continued growth is now the main one. 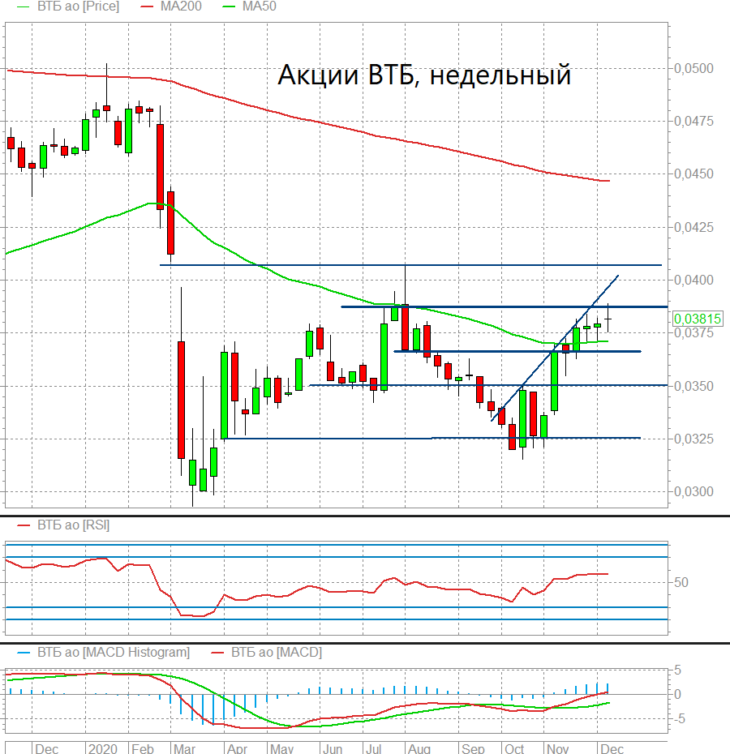