Virgin Galactic shares are up 30% in the past week ahead of the company’s third space flight on Saturday. The CEO said the flight was flawless, bringing the company closer to its goal of commercializing space tourism.

The VSS Unity spacecraft was raised to an altitude of about 13.4 thousand km. carrier aircraft VMS Eve, which took off from the America Cosmodrome in New Mexico. Then the VSS Unity ship was detached, it started its rocket engine and accelerated to more than three times the speed of sound.

After reaching Mach 3 (3675.13 km / h), the ship made a slow somersault in microgravity at the edge of space to glide smoothly back to the runway of the America Cosmodrome in New Mexico.

Overall, the test flight took only one hour and eight minutes from start to finish.

At the helm of VSS Unity were two experienced pilots, Dave McKay and CJ Sturkow, who had already flown into space. Kelly Latimer and Michael Masucci piloted the VMS Eve. 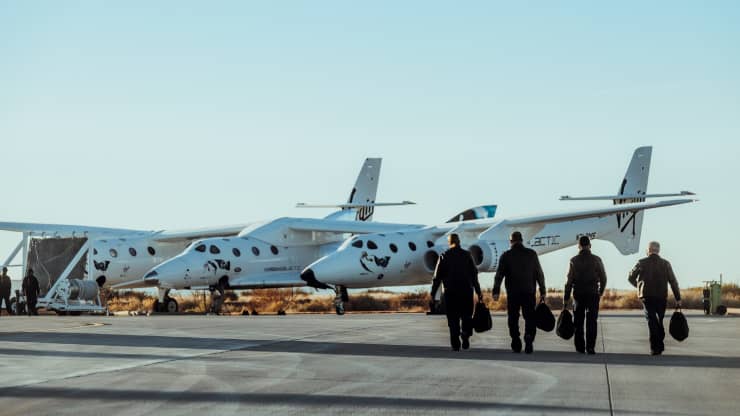 Upon completion of the flight, Virgin Galactic CEO Michael Colglazer said in an interview with CNBC, “It was flawless.”

“The crew had extraordinary views of the Earth’s bend against the backdrop of the darkness of space,” the company added. “Below was a vivid view of White Sands National Park in New Mexico. Today’s experience gives Virgin Galactic Future Astronaut customers a sense of what lies ahead. ”

The success of this flight was extremely important as the company is on track to obtain a license for commercial space flights from the US Federal Aviation Administration (FAA).

This license requires Virgin Galactic to fly four more flights, one of which will include the company’s founder, Sir Richard Branson.

The previous two space tests were carried out by the company from its research center in the Mojave Desert in California.

Virgin intends to cash in on tourist trips to space by carrying up to six passengers along with two pilots. The company received $ 80 million for nearly 600 reservations for future flights, which sell for between $ 200,000 and $ 250,000 per seat.

During Saturday’s flight, the Virgin Galactic team performed a series of test tasks that included verifying the integrity of all flight control systems.

According to the press release, “the upgraded horizontal stabilizers of the spacecraft were tested, and the reduction of electromagnetic interference was confirmed.”

In addition, the crew “conducted lucrative research and development experiments as part of NASA’s flight program.”

This flight has been postponed several times since December 2020 due to EMI issues.

Virgin Galactic, which rose sharply in early 2021, has plunged 55.3% in the last quarter amid investor disappointment with the company.

However, resumption of flights and a successful test flight on Saturday could restore investor confidence. Virgin Galactic, which went public in 2018, is up 43.2% over the past 12 months, including a 30.2% gain over the past week.

Last week, a UBS analyst upgraded Virgin Galactic’s stock from Neutral to Buy, but lowered its target price from $ 40 to $ 36, which nevertheless suggests upside potential of almost 71% from Friday’s $ 21 closing price. 07.

Bernstein analyst Douglas Harned commented on the news of Virgin Galactic’s latest flight: “We view this as extremely positive as this flight restores a test schedule that could allow commercial passenger flights to begin by early 2022.”

Market experts also note that the company has managed to get ahead of its private rivals: Jeff Bezos’ space company Blue Origin and Elon Musk’s Spacex, which are also striving to fulfill the dream of private space flights by making them more frequent.

Should you buy NVIDIA shares ahead of the quarterly report and split?