Two arguments for selling the dollar in January


The beginning of the new year was not distinguished by the novelty of ideas on the foreign exchange market: the dollar is actively pressed against the plinth, and it lowers against the main, commodity currencies and currencies of emerging markets. The ruble gained 1.2% against the dollar on the back of rising oil prices.

Two ideas can be distinguished as to why the dollar will feel new lows at least in the first half of January.

First, the macro idea driving the dollar’s fall is that no central bank can beat the Fed in easing credit conditions. Let me remind you that following the results of the last Fed meeting, all FOMC officials, with the exception of one, expect that the first rate hike will take place no earlier than 2023. No other central bank has dared to give “guarantees” of a low rate for such a long period (more than 2 years). And he will not dare, because if we assume that we have passed the bottom of the recession, then it is reasonable to expect that central banks (except for the Fed) will smoothly move to normalizing policies, which will only increase the difference in the softness of credit conditions between the Fed and other central banks. This is a factor in the weakening of the dollar

Only a rapid acceleration of inflation in the United States (primarily its “precursor” – inflationary expectations) will be able to prevent the implementation of such a scenario, which will require an urgent increase in the interest rate. However, given the Fed’s new inflationary concept, inflation should do its best to alarm Central Bank officials. For example, speed up to 2.5% -3.0%, and in a short time. Over the period of time in the next quarter-six months, such an outcome can be confidently considered a tail (insignificant) risk.

Technically, the dollar index was held in a downward sloping channel, despite some attempts to break higher during the Christmas holidays. Earlier, we discussed with you that short positions should be a priority, and given that the correction from 89.50 has been won back, the next target, in my opinion, is the level of 89.00, 88.75, and then, after the rebound, the lower border of the channel in the range of 88.75-88.50. The big question is about the timing of this scenario. 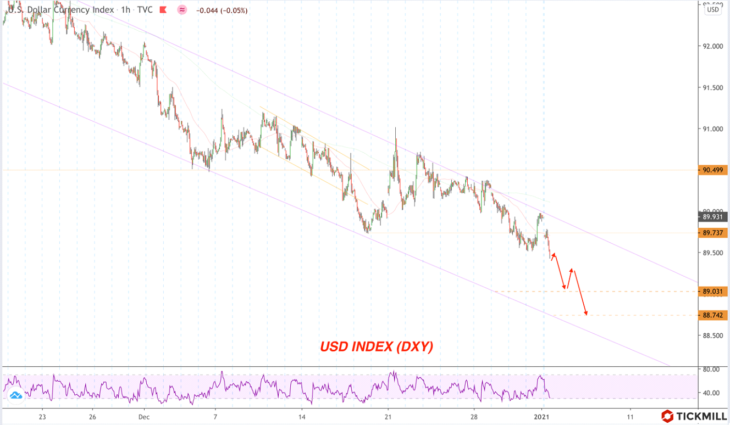 The second argument for selling the dollar, over the next week or two, is the sharply increased chances that “giant borrowers” Democrats will be able to strip Republicans of the Senate majority:

Let me remind you that the second round of elections in Georgia will take place in mid-January, where Democrats and Republicans will compete for two decisive seats in the Senate.

If Republicans lose their majority, opponents effectively gain control of the Senate despite a draw (more on that in today’s review). The economic initiatives of the Democrats, as we were shown by the battles over the fiscal deal in October-December, are associated with a more active buildup of the national debt (and most likely the money supply, since the Fed will be forced to join), which threatens to devalue the dollar. Therefore, in my opinion, the classic sale of USD on rumors before the event is very relevant.