The ruble continued to strengthen after the OPEC + meeting

The Russian ruble managed to continue strengthening against the backdrop of support from rising oil prices. Thus, according to the results of the meeting of the OPEC + ministerial committee, quotas for the production of “black gold” were preserved for all participating countries, except for Russia and Kazakhstan, which were allowed to increase production by 130 thousand and 20 thousand barrels per day, respectively. Saudi Arabian Energy Minister Prince Abdulaziz bin Salman said this decision was dictated by the fragile balance in the oil market. It is also worth noting that the OPEC + decision also applies to the voluntary reduction in oil production by Saudi Arabia by 1 million barrels per day.

In addition, it is worth noting that new sanctions from the EU and the United States against representatives of law enforcement agencies and narrowly focused chemical military enterprises of the Russian Federation could not seriously affect the exchange rate of the national currency. The sanctions turned out to be too precise, especially considering that two out of four representatives of the security forces were already under sanctions from the United States, Canada and the United Kingdom. However, it is worth noting here that the United States and Great Britain announced the possible introduction of new, more sensitive sanctions that could affect the Russian national debt and large businessmen.

As for the strengthening of the dollar, the main factor behind the strengthening of the American currency is the growth of yields on US government bonds, which intensified after the statement of the head of the Federal Reserve, Jerome Powell, about the further adherence to a soft monetary policy by the central bank. Powell also said that he does not see any risks in the growth of government bond yields, and the regulator does not yet consider it necessary to tighten monetary policy.

With regard to the American currency and the economy, it is also worth noting that US Treasury Secretary Janet Yellen, in her comments on the adoption of the $ 1.9 trillion anti-crisis package, announced a possible earlier economic recovery in this regard, as well as the availability of the entire set of tools to curb inflation.

In terms of macroeconomic statistics, last week in Russia were published indexes of business activity in the manufacturing and services sectors for February from Markit, which amounted to 51.5 and 52.2 points, respectively. Compared to the January results, the index grew by 0.6 points in manufacturing, and sank 0.2 points in the service sector. In general, the Markit press release noted a good pace of economic recovery in the Russian Federation in early 2021 and hopes for a continuation of the trend in the future. At the same time, attention is drawn to the continuing growth of inflation, which amounted to 5.7% (yoy) in February, which is higher than the January results of 5.2% (yoy) and forecasts of 5.5% (yoy). d).

This week in Russia will be published data for January on the trade balance.

USD / RUB
The USD / RUB currency pair continues to consolidate in the range of 73.0-75.0 rubles. per dollar and is trading at the level of 74.0. Stochastic lines are directed upwards, but their growth is slowing down, which may indicate a possible decline in quotations in the short term. 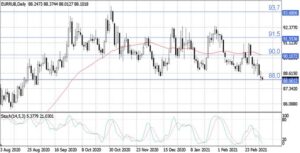 The official exchange rate of the dollar and euro against the ruble as of March 11, 2021