Today, during the Asian session, Brent crude prices are showing flat dynamics, waiting for new drivers to appear on the market.

The day before, the instrument rose moderately in response to improved prospects for the US economic recovery, but failed to gain a foothold at new local highs. Investors are assessing the possibility of inflation in the United States, which may lead to an adjustment in the monetary policy of the American regulator. In particular, Friday’s data on manufacturing inflation already pointed to a record strengthening, so now the focus is on the statistics on consumer inflation, which will be released on Tuesday.

Investors are also awaiting the publication of a report from the American Petroleum Institute on oil reserves for the week on April 9. The previous report indicated a decline in inventories by 2.618 million barrels, and the results of the US Department of Energy slightly exceeded this value and reflected a decline of 3.522 million barrels.

On the daily chart, Bollinger Bands are turning into a horizontal plane. The price range remains practically unchanged, but remains spacious enough for the current level of market activity. The MACD indicator turned in the direction of growth, having formed a weak buy signal (the histogram is located above the signal line). Stochastic is showing similar dynamics with slightly more activity. The current readings of the indicator do not contradict the further development of the upward dynamics in the ultra-short term.

You should hold the existing long positions until the signals from technical indicators are clarified. 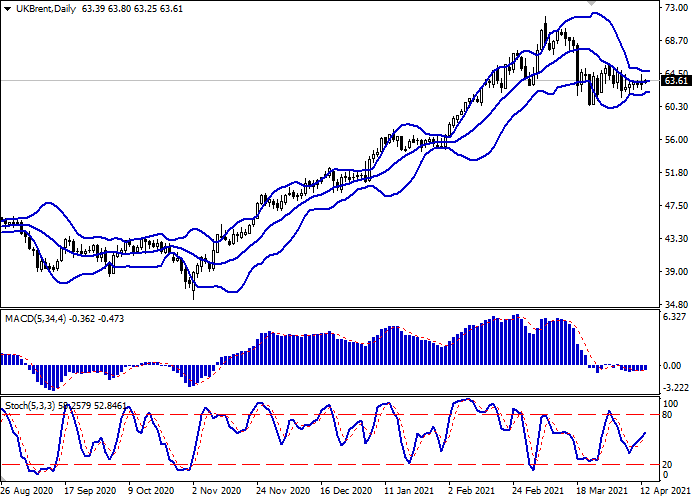 Excellent conditions have been created for the growth of oil shares