the most popular platform in the US and surpasses Facebook, says Pew Research Center

The rating of social networks in 2021, compiled by the Pew Research Center, consists of 10 applications, YouTube took first place, Facebook in second, Reddit rose to tenth place. The top includes both apps with virtually no growing user base in the US and strong growth in 2021.

Google’s YouTube (GOOGL, GOOG) is the favorite platform among Americans in 2021, according to Pew Research Center, which released a new report this month.

The Pew Research Center survey for which the data is presented in this article is based on a survey of Americans and does not include data on preferences among international users.

Interestingly, too, according to a report by the analyst firm, the number of US adults using Facebook has remained almost unchanged since 2018. By contrast, YouTube has reported an 8 percent increase in the number of users in America since 2019.

The Reddit app, which is essentially a huge collection of forums, has grown its audience by 7% as of 2021 since 2019. In 2020, Reddit was featured prominently in Wall Street news as traders discussed their trading there.

Here are the top 10 social media platforms in the US, according to a 2021 Pew Research Center survey (parentheses are percent of US adult users):

Nextdoor also ranked # 11 on the list, with approximately 13% of American adults using the app. The analyst firm warned that the study was based on surveys and had statistical bias.

Below is a graph of US user growth for the listed apps from 2012 and later for apps that came later.

Analytics of age data among users is very important for marketers who indicate that young people and women are more active in apps and in their purchases.

So, in order to target the largest number of young audiences, advertisers should direct their spending to applications such as Instagram, Snapchat and TikTok, which have been popular among young people aged 18-29 for several years in a row.

Facebook, although it is used by about 70% of young users, is also visited by 50% of users between the ages of 50 and 64. YouTube, the most popular social media platform in America, has a pretty decent user base across all age groups, with 49% of older users and 95% of younger users having access to the platform. 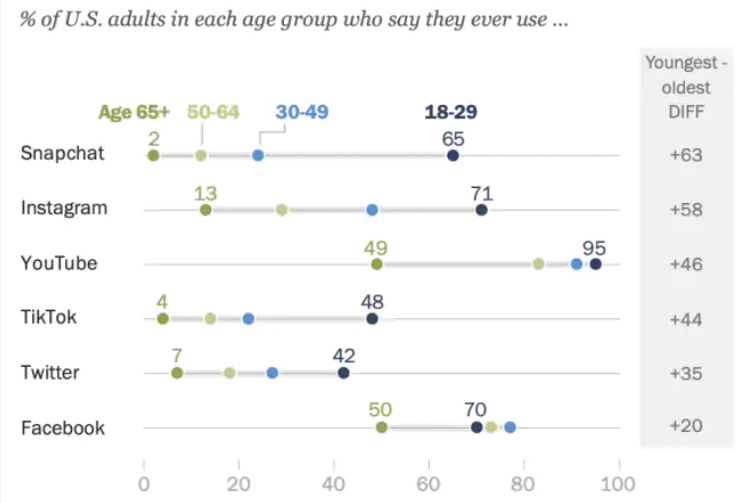 A special feature of Pinterest is that this app is preferred mostly by women (46%) and not by men (16%). 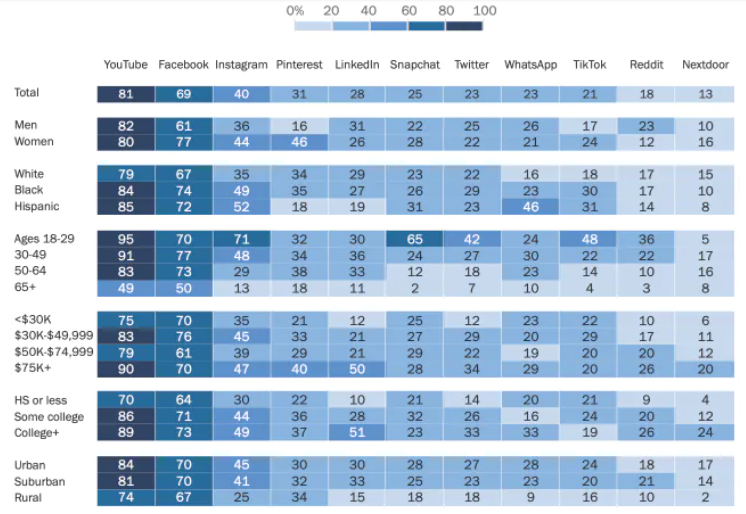 A notable feature of the 2021 Social Media Survey is the fact that Facebook’s US user base growth has largely stalled over the past five years, although it remains the second most popular adult social media platform in the US.

The situation is much the same for Instagram, Pinterest, LinkedIn, Twitter, Snapchat, and WhatsApp – the American user base of all of those listed has remained statistically unchanged since 2019, with growth reportedly driven mainly by the addition of international users outside of the United States.