Tesla shares on Monday will officially occupy the fifth place in the list of stocks of companies with the largest capitalization of the benchmark S&P 500. On the first day of trading Tesla in the S&P 500, some investors decided to “take profit” by selling strongly appreciated shares.

By ramping up production and opening a plant in China, Tesla has been able to post profit for five consecutive quarters. Along with the sharply increased capitalization, this gave the company a chance to be included in the S&P 500 index.

Tesla’s success and demand story also stood out against the backdrop of the general COVID-19 pandemic crisis and the strong downturn in ICE car maker sales. By contrast, the Tesla-dominated electric vehicle market has grown thanks to increased demand. 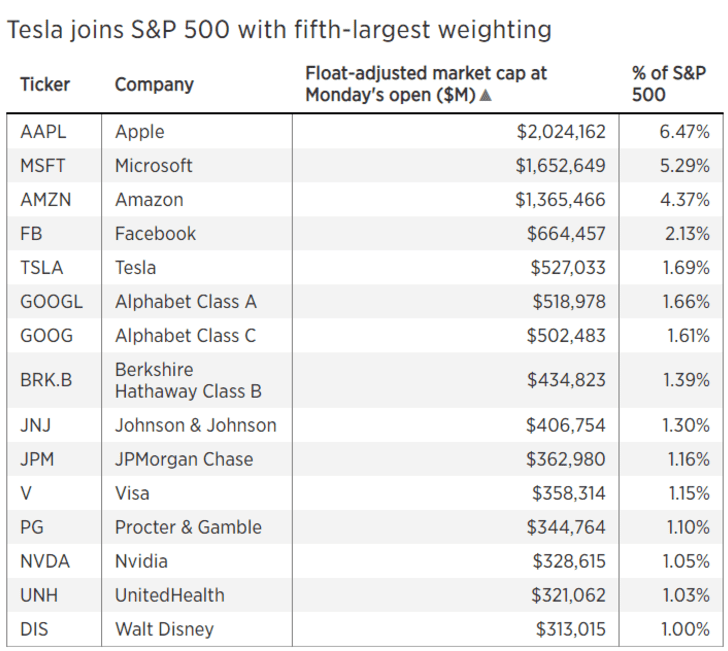 Market analysts have often noted the high volatility of Tesla shares and now some believe that adding them to the S&P 500 will make it more volatile. According to some experts, for every $ 11.11 price change in Tesla S&P 500 shares, there will be 1 point change.

Tesla’s stock jump of nearly 6% on Friday was largely anticipated as passive fund managers and managers of various investment companies using the S&P 500 as a benchmark had to acquire Tesla shares.

Experts also noted the growth of speculation among investors betting for the short term.

Tesla shares fell 5% on Monday before the opening of trading, as some investors decided to “take profit” by selling shares at the maximum price.

The motive may also be the rather low average valuation of Tesla shares among Wall Street analysts, which, despite all the company’s achievements this year, is significantly lower than the current share price.

Recently, two analytical firms, Jefferies and New Street, downgraded Tesla shares from “buy” to “hold” (“neutral”). Jefferies has raised its target price from $ 500 to $ 650, while New Street retained its $ 578 valuation, but that’s below Tesla’s Friday closing price of $ 695.

While Tesla regularly performs above Wall Street expectations, its vehicle sales are skyrocketing and the company is expanding with new factories around the world, Tesla’s share price has reached levels that are increasingly difficult to justify.

The announced expansion plans (building new factories and making new cars) require a large capital investment that will make it harder for Tesla to make a profit. In addition, CEO Elon Musk has announced his intention to create an affordable $ 25,000 electric vehicle by 2023, and increased competition from Chinese electric vehicle manufacturers could threaten sales in the largest market.

At the same time, Wedbush analyst Dan Ives raised his target price for Tesla shares from $ 155 to $ 715, Goldman Sachs analyst Mark Delaney gave an even higher estimate of $ 780 – the highest level on Wall Street. These analysts believe Tesla will achieve its 500,000 EV delivery target in 2020. For 2021, Ives predicts deliveries of about 710,000 Tesla electric vehicles, which will mean a 40% increase.

Watch out for online shopping scams this holiday season