Sberbank shares held quite weak for several days, which ultimately led to a breakdown of the short-term growing trend. On Monday, the price left the rising channel built from the February lows.

It was noted that the support was at the level of 286.5 and its breakdown would shift the benchmarks to the next Fibonacci correction level in the 281 region. As you can see, this is where the quotes came at the day’s lows. On the four-hour chart, the RSI has already reached the oversold zone and a rebound to the nearest resistance is quite possible.

Now it will be just a rebound, whereas earlier the scenario of a rise above 300 was considered. Now the risks of a return to the 2021 lows, the lower border of the sideways 257-296, have emerged. We do not fully rely on such a scenario yet, but a negative signal was obviously received. Breakdown of 276.5 will give an impetus to its implementation.

A breakdown of 286 will improve the local picture. 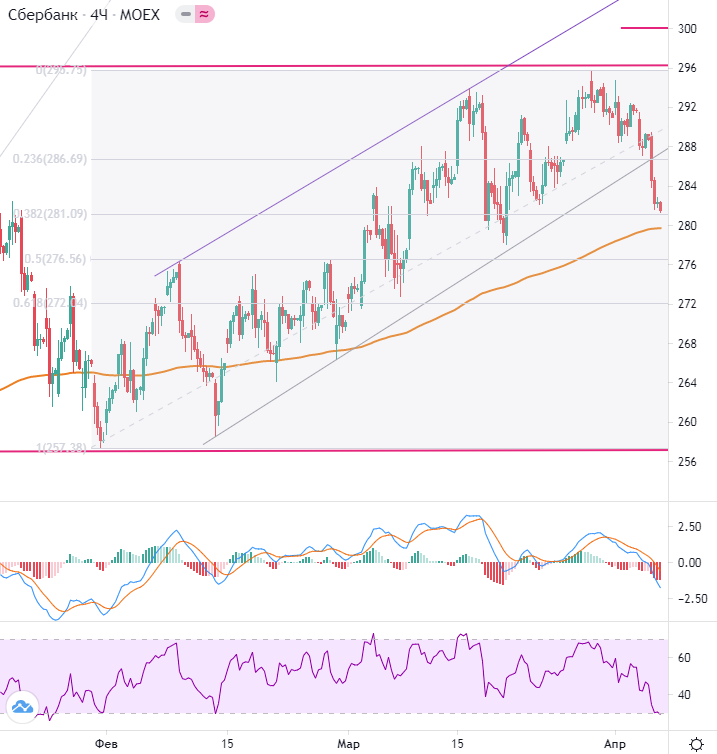 The external background is neutral this morning. Asian indices show multidirectional dynamics. Futures on the S&P 500 in the morning rose in price by 0.04%. Brent crude is growing 0.4% today. Futures on Sberbank shares is growing by 0.15% relative to the close of the evening session. The opening is expected to be slightly above the previous session’s close.

Sberbank’s share price has historically been in an upward trend. In 2020, it was able to break up from broad consolidation and renew record levels. The mid-term trend is also growing now, but this trend is shifting more and more to a wide sideways trend.

The bank occupies a leading position in the Russian economy, developing many digital services that are not directly related to banking. The consensus forecast is at 352.2 rubles. per share.

In GBPUSD, you need to wait for the breakdown of the strong support level of 1.3819

For the poor in the Russian Federation, they can introduce additional benefits for paying for electricity