According to the results of the last week of February, the USD / RUB rate increased by 0.14% to the level of 74.57 rubles. per dollar, and the EUR / RUB rate sank 0.82% to 89.55 rubles. for the euro. At the beginning of this week, the ruble begins to weaken against the dollar and the euro.

The pressure on the Russian currency is exerted by the oil quotes that have fallen by 2.3% in 2 days. This happened against the backdrop of investors’ expectations to ease quotas for oil production during a meeting of the OPEC + ministerial committee, which will be held on March 4. Let us remind that Russia and a number of other OPEC + countries will probably advocate easing quotas, and Saudi Arabia – for their preservation. Undoubtedly, the decision taken at the council will significantly affect the pricing in the oil market in the near future. In addition, many were alarmed by the decline in the index of business activity in the manufacturing sector in China, as it reflects the need for energy resources. The index dipped 0.6 p.p. to 50.9 points, the lowest since May 2020. In addition, the strengthening of the US dollar also put pressure on assets denominated in this currency. We would like to remind that the American currency began its rapid growth against the background of the increase in the yield of the US Treasury bonds and, despite the correction of the latter, it continues to grow.

Among the factors negatively affecting the ruble exchange rate may be new sanctions from the European Union. However, at the moment, the 27 EU member states with great difficulty were able to agree on sanctions against four representatives of the Russian security agencies, two of whom were already under sanctions from the United States, Britain and Canada. Based on this, it can be assumed that the effect of the introduction of new sanctions will not be as noticeable both for the Russian economy and for the currency. However, the recent statement by US President Joe Biden that “… Russia will be punished for its aggressive actions towards Ukraine …” reminded of the possibility of tougher sanctions. So, according to Reuters, the United States may impose new sanctions as early as Tuesday, March 2, against persons associated with the poisoning of opposition leader A. Navalny.

The issue of sanctions against Nord Stream 2 also remains unresolved. At the moment, work on the completion of the project continues, but many contractors are not ready to cooperate with Russia. Germany and the United States, in turn, want the project not to be “used as a weapon against Ukraine,” depriving the country of energy resources and stopping gas transit.

In terms of macroeconomic statistics for Russia, no significant data was released last week. However, on Monday, March 1, the data on the industrial PMI from Markit for February was published, which amounted to 51.5 points, showing an increase of 0.6 points compared with the January result of 50.9 points. In a press release, Markit said that the economy is recovering in Russia amid growing business optimism, which, in turn, amounted to -1 point against -1.7 points in January.

It is also worth noting that, according to the Central Bank of the Russian Federation, the average maximum rate on ruble deposits for up to 1 year by the end of February increased from 4.47% to 4.53% per annum. This could be the beginning of that very upward reversal of yields due to rising inflation and the recent rise in yields on government securities.

This week in Russia will be published data for February on the index of business activity in the services sector from Markit (Wednesday), as well as data on vehicle sales, inflation and corporate profit and loss (Friday).

USD / RUB
The USD / RUB currency pair approached the resistance line of 75 rubles per dollar and is trading at 74.57. Stochastic lines are pointing up, which is still favorable for buying, however, the movement is slowing down and possibly preparing for a reversal.

EUR / RUB
The EUR / RUB quotes dropped below the support line at 90 and are trading at 89.33 rubles per euro. Stochastic lines are moving up, but the trend is gradually slowing down. The situation is still favorable for buying the instrument. 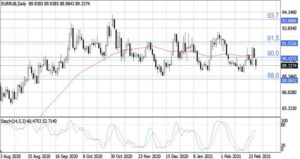 The education system lives in a dock-like reality