Rosneft shares in the last trading session of the week fell by 3.79%. The closing price was 423.95 rubles. The papers looked at the market level. Trading volume amounted to 5.5 billion rubles.

On Monday, trading opened with a gap down, after which the quotes came to the support level of 420. This mark was the target of the decline from the formed movement of shares in late November.

On the Fibonacci grid, the approach to the 420 level was 0.382 of the November growth wave – the main goal of the correction in uptrends.

The technical picture suggests a rise to the broken level 440 – sellers’ control zone. If Rosneft shares pass it and consolidate higher, then medium-term growth targets will shift to 484-504.

If the 440 level is not passed, the risks of going to 400 will increase. However, yesterday’s false breakdown of $ 50 of Brent oil is not yet in favor of such a scenario. Today it is necessary to monitor this mark for Brent.

The mid-term picture indicates growth, therefore, the rollback in Rosneft shares to the 420-440 region can be regarded as a reason for the re-formation of long positions.

There are no divergences on the RSI and MACD indicators. On the 4-hour chart, the RSI curve is in the oversold zone, it is at the 31 point mark. The moving SMA crossed the EMA downwards, which is not in favor of buyers. The technical picture is mixed. First of all, you need to monitor the development of support and resistance levels: 440 and 415-420. 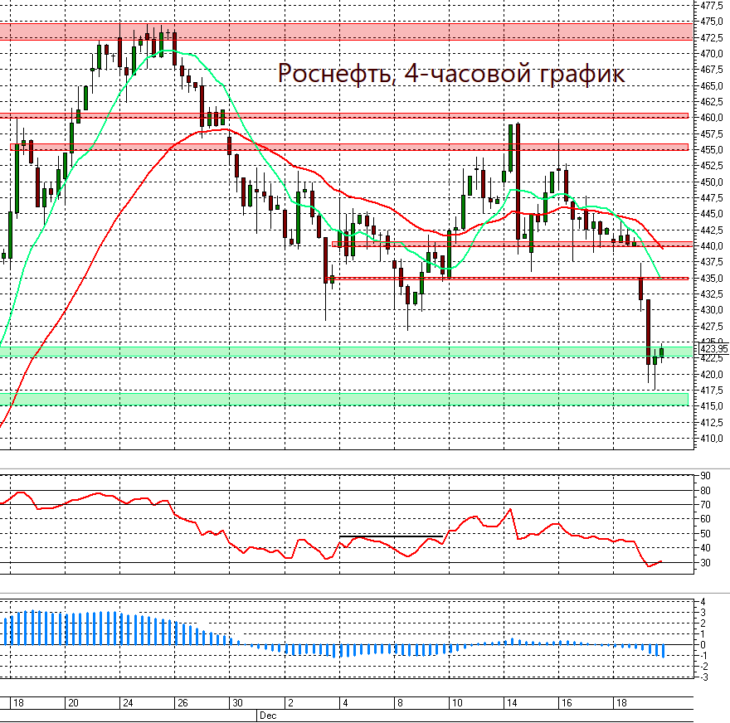 The external background was moderately negative this morning. S&P 500 Index futures are down 0.2%. Asian indices are trading in the red. Brent crude is down 0.4%. If the background persists, the opening on Rosneft shares will be below Monday’s close.

Rosneft is the first oil company to return to pre-February-March sales levels. For three and a half weeks from the lows, Rosneft quotes jumped to 38%.

The RSI curve is under the overbought zone at the 61 point mark, the MACD histogram does not show any divergences with the price movement, which indicates that there is a reserve of buyers’ forces for further growth.

In my opinion, the price movement formed in early November tends to the 485–500 area. Additional confirmation of this is the closing of the weekly candle above 440. The nearest two candles have long lower shadows, which additionally indicates the medium-term buying power.

If this week the securities close below 440, then the target of the fall may become the level of 400. 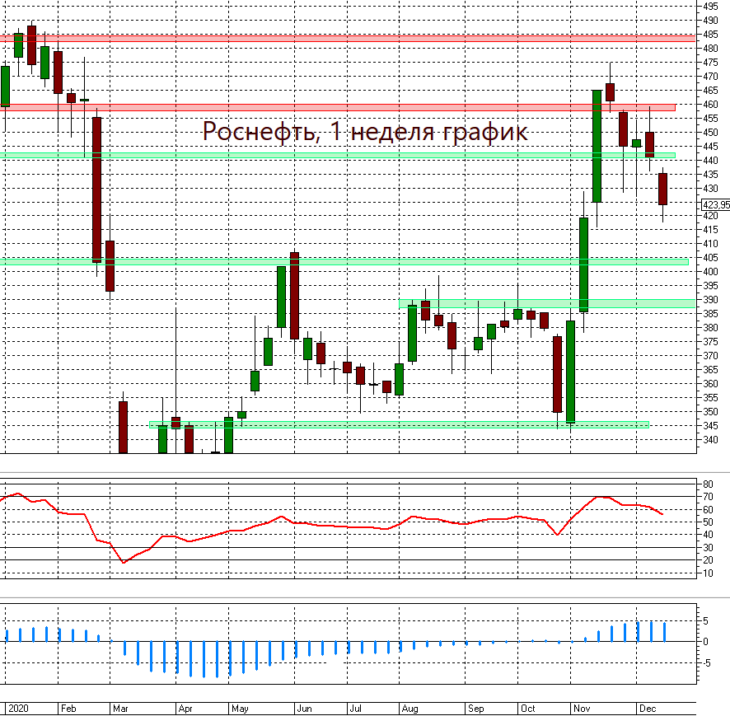 Baby food is a contender for a rise in price