A $ 1.9 trillion bailout bill came into effect last week. and Americans affected by the COVID-19 pandemic began receiving the first checks of $ 1,400. According to CNN, roughly 90% of American families will be eligible for these incentive checks.

Economists and market analysts are trying to determine where Americans will channel these funds. The US government expects that the purchasing power of Americans will increase and they will direct their funds to purchases.

However, most Americans say that instead of spending, they will use the money to pay off debt, increase savings or invest, according to a Bank of America poll that polled 3,000 people.

The data showed that 30% of those surveyed will use the money to pay off their debt, 25% will keep it, and 9% will invest, only 36% intend to spend these checks.

These funds will “remain in the financial system and will not create demand for goods and services in the real sector of the economy,” analysts say Bank of America, “it is unclear who will inject funds into the consumer markets for which prices are now calculated.”

Major stock indexes hit new records three days in a row after Biden signed into law as investors bet the inflow will spur a rapid recovery in the world’s largest economy.

Another survey of 430 people by Deutsche Bank found that “respondents plan to invest a significant portion (37%) of any forthcoming incentive directly in stocks,” which is a “significant influx” into the stock market.

In the previous two rounds of aid in 2020, when the coronavirus pandemic brought the economy to a sudden halt, only about 8% of the funds were invested in equities, according to bank analysts.

The survey found that young people aged 25 to 34 make up the largest proportion of people planning to invest in the stock market with their federal aid funds, followed by people aged 35 to 44.

Even those whose income level is below $ 25,000 are planning to invest. At the same time, more than 40% of respondents consider the investment period for a year or less.

A Pew Research Center study conducted before the outbreak of the pandemic in March 2020 found that even among those with an annual household income of less than $ 35,000, about one in five have stock market assets. At the same time, the size of investments in shares increases as income rises, and among those with income above $ 100,000, 88% own shares – directly or indirectly.

Goldman Sachs, in turn, calculated that with the Biden bailout program, “American families will represent the largest source of demand for US stocks in 2021.”

Goldman Sachs economist David Kostin said that, according to the bank, demand from the population for shares this year will grow to $ 350 billion from $ 100 billion last year.

“This reflects faster economic growth and higher interest rates than we previously assumed, additional incentive payments to individuals and increased retail activity. at the beginning of 2021, ”the investment bank said.

Investment bank Mizuho Securities has determined that about 10% of checks, or about $ 40 billion of the $ 380 billion in direct incentive checks, will be invested in stocks or in cryptocurrencies such as Bitcoin.

A survey of 235 people earning less than $ 150K showed that 35 to 40% of respondents said they invest some of their incentive checks in stocks and cryptocurrencies. 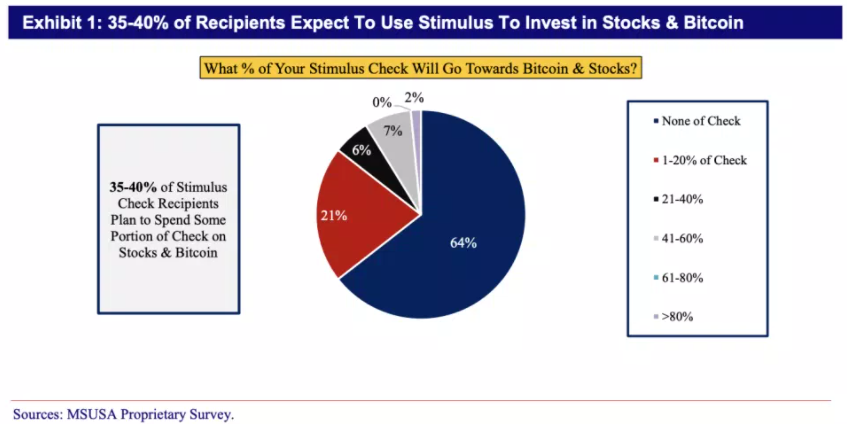 61% of these investors intend to buy bitcoin, said Dan Dolev, co-director of the Mizuho study.

“We were very surprised” that bitcoin “is a larger investment vehicle than stocks,” he said in an interview with CNBC.

The cryptocurrency hit an all-time high of $ 60,000 on Saturday.

Inflation in the Russian Federation has reached its peak, or is close to it – Reshetnikov