The worldwide GameStop stock scandal was a reflection of the changing state of affairs in the stock market. Retail investors using platforms like Robinhood and Charles Schwab received better stock prices than institutional investors. An investigation is underway against Citadel Securities, which pays these platforms for order flows.

2020 was not only the year of the global crisis due to the COVID-19 pandemic, but also the year of dramatic transformations among the participants in the US stock market.

In addition to the largest stock exchanges NYSE and NASDAQ, the share of influence of such major OTC players as Citadel Securities and Virtu Financial, which operate as trading companies – intermediaries that execute trade orders of retail investors and are called internalizers, has grown significantly over the past year.

“Profit at the expense of the client”

Online broker applications such as Robinhood and Schwab typically send order flows from their retail investors to companies such as Citadel Securities, Virtu, or G1 Execution to execute transactions. They, in turn, match buyers and sellers at the best prices within the company and not on a traditional exchange like the NYSE or NASDAQ.

Thus, Citadel Securities could trade at prices that were better for the investor than those quoted on public exchanges.

Citadel Securities, Virtu capitalize on high trade volumes and price differentials, and are paid by Robinhood and Charles Schwab to provide retail investors with zero commissions to trade.

As a result, the retail investor gets free access to the US equity markets, with better prices than any institutional investor can get.

Changes in the state of affairs in the stock market

The massive speculative betting on GameStop stock, which has been the target of major short sellers, has shown the power of retailers such as Robinhood. The big hedge funds that bet on the decline in GameStop’s stock suffered multi-billion dollar losses in this case. Marketinfo.pro wrote about this in the articles “Wall Street Expects GameStop Shares to Fall After Speculative Rise of 145%” and “Why Didn’t GameStop Take Advantage of the Insane Rise in Stocks?”

At the same time, the reason for the worldwide attention to this situation is not in the fact of speculation, which often occurs in the stock market, but in the fact that a large share of the total trading volume has moved from open stock exchanges with transparent quotes and transactions to the private market of such over-the-counter players as Citadel Securities and Virtu Financial.

Quartz and Bloomberg Intelligence have provided the following chart “Shares of the US stock market by market in December 2020” from which it follows that Citadel Securities and Virtu Financial together make up a larger share of the total stock market (22.8%) than the New York Stock Exchange (NYSE).

The largest brokerage firm Rosenblatt Securities warned of the risks of such a situation in 2018, but then, according to its data, all internalizers accounted for less than 2.5% of trading in the US stock market. OTC dark pools accounted for roughly 15%, with most of the rest of the trading volume on traditional exchanges.
For many years prior to this, all over-the-counter trading typically comprised between 30% and 40% of total US stocks. The latest analysis by Bloomberg showed that OTC trading volume exceeded 50% at the end of 2020 – beginning of 2021. 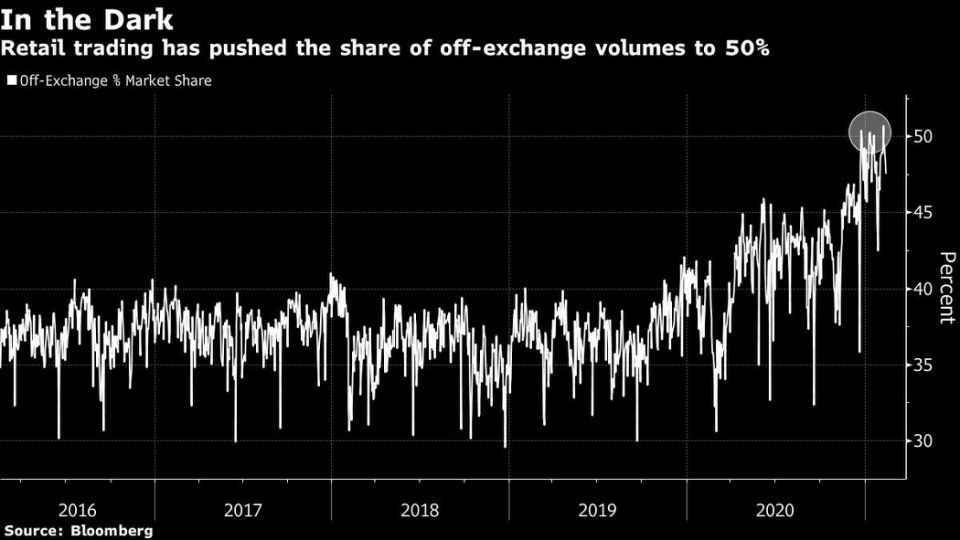 Many pundits and major investors such as hedge funds are concerned about the situation as they believe retail investors are having an increasing influence and a situation like GameStop could happen again.

Such huge off-exchange trading volumes mean that more than half of stock transactions may be conducted in secret and current prices on exchanges may not reflect the reality. It also makes it difficult to trade large volumes on official exchanges.

This week, the US Congress began to consider the case against GameStop and other companies with hearings, which will be attended by the owner of Citadel Securities, billionaire Ken Griffin. Those also set to testify include executives from Robinhood and hedge fund Melvin Capital.

The current situation is also likely to be a top priority for Gary Gensler, who was elected by US President Joe Biden to lead the Securities and Exchange Commission (SEC), if his appointment is approved by Congress.

Virtu CEO Doug Qifu said in November that he was not at all worried about investigations by officials in Washington.

Interactive Brokers chairman Thomas Peterffy said in an interview with CNBC on Wednesday that the US financial system is facing more stress during the GameStop hype than is commonly believed.

“We are getting dangerously close to the collapse of the entire system, and the public seems to be completely unaware of this, including Congress and regulators,” Peterffy said.

A tax on artisanal mining may appear in Russia