At the previous trading session, shares of GMK Norilsk Nickel rose by 0.4%, closing at 23,472 rubles. The security looked at the market level, adding 0.39%.

At the auction on Thursday, Norilsk Nickel shares bounced off local lows and even broke through the nearest resistance at 23,800 rubles. Nevertheless, in the second half of the day, Bloomberg, citing European officials, reported that Oleg Deripaska’s influence over RUSAL was retained, despite the sanctions against him. This led to a collapse in the shares of the aluminum company and a negative reaction in the quotes of Norilsk Nickel.

Formally, the connection between Deripaska’s possible influence on RUSAL and Norilsk Nickel is very indirect. Rather, the decline in Norilsk Nickel shares is an emotional reaction, and it is difficult to identify any possible consequences for the company due to the sanctions history of RUSAL.

The short-term technical picture has improved. Prior to the Bloomberg announcement, we watched the bulls seize the initiative, interrupting the corrective pullback. This is a positive moment for the quotes, signaling that after the emotional reaction to the news about RUSAL is digested, the growth is likely to resume. However, at today’s trading session it cannot be completely ruled out that the echo of sanctions threats will still put pressure on Norilsk Nickel’s quotes. An important level is still 23,200 rubles. – before its breakdown, the preponderance of forces is on the side of buyers. 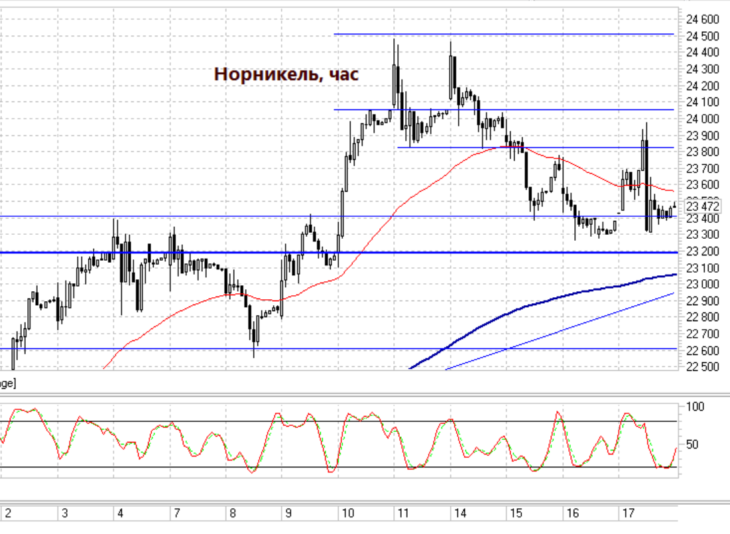 The external background is mixed this morning. American indices after the close of our daytime session on Thursday remained at about the same levels. Asian sites are trading in different directions today and do not show uniform dynamics. Futures on the S&P 500 index in the morning are down 0.2%, contracts for Brent oil are in the red by 0.3% and are around $ 51.3. All this suggests that if the external background persists, the opening will take place near the previous day’s close.

Since 2009, Norilsk Nickel shares have been in a big up-trend. Growth impulses alternate with periods of sideways consolidation, drawdowns are quickly redeemed, indicating the strength of the trend. The last period of prolonged sideways consolidation was observed from the beginning of 2015 to November 2018. Quotes came out of another sideways upward, and since then the shares have grown by about 1.5 times, supported by the growth in prices for key Norilsk Nickel products.

The threat of the spread of coronavirus led to a large-scale decline in quotations in March 2020. At the end of May, an accident occurred at CHPP-3, owned by Norilsk Nickel. Due to the incident, the shares rolled back again, laying the risks of significant financial consequences for the company. As a result, the papers were again in the wide saw.

In November 2020, a new wave of growth began, within which all-time highs were updated. Despite the local overbought, the long-term outlook on the securities is generally positive. 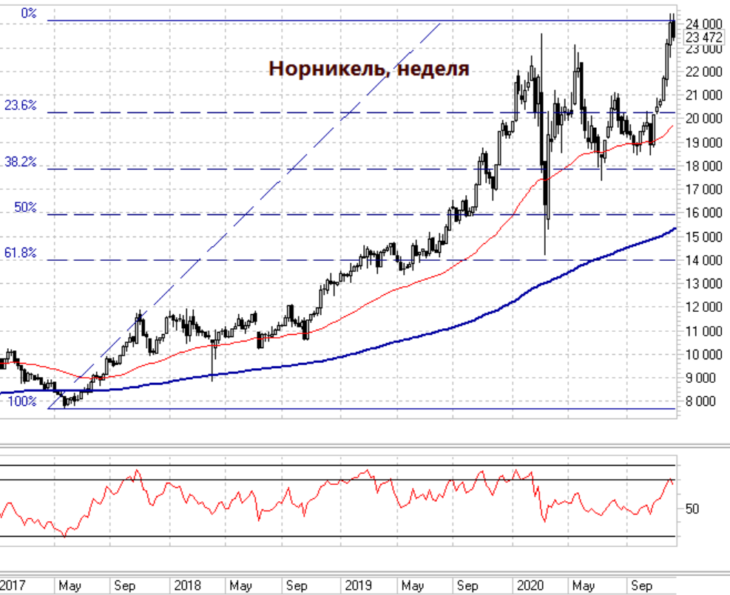