NIO and XPeng Announce Deliveries for March and Q1 2021

Chinese electric vehicle makers NIO and XPeng today reported a rise in shipments in March after declining in February, as well as new supply records for the first quarter of 2021. The XPeng autopilot system has set the record for the longest autonomous driving with minimal human intervention.

Shares in China’s electric vehicle makers NIO (NIO) and Xpeng (XPEV) both rallied 5.5% ahead of trading on Thursday after the companies have published their supply reports.

Market leader Tesla (TSLA) is expected to report on deliveries for the first three months of 2021 today after the close of trading, and Li Auto (LI) and BYD Auto will publish their data in the coming days.

NIO reported deliveries of 7,257 of its SUVs in March, significantly better than the drop to 5,578 units in February due to the Chinese New Year and better than 7,225 units in January. NIO sales in March this year were 373% higher compared to March last year.

For the entire 1st quarter of 2021, NIO delivered 20,060 vehicles, which is 16.3% higher than in the previous fourth quarter and is a new quarterly record that is 423% higher than last year.

NIO ES6 SUV became the top seller again in March, followed by EC6, with the larger ES8 in third place in terms of sales. Cumulative deliveries of ES8, ES6 and EC6 as of March 31, 2021 reached 95,701 vehicles.

Deliveries of the first ET7 NIO premium sedan are scheduled to begin in the first quarter of 2022.

Last week, Nio warned of a five-day suspension of its plant for semiconductor shortages, cutting its first-quarter delivery forecast from 20,000 to 20,500 vehicles to about 19,500 vehicles.

Due to the problem of the global shortage of chips, Nio’s management may further reduce the pace of production and shipments in the second quarter. 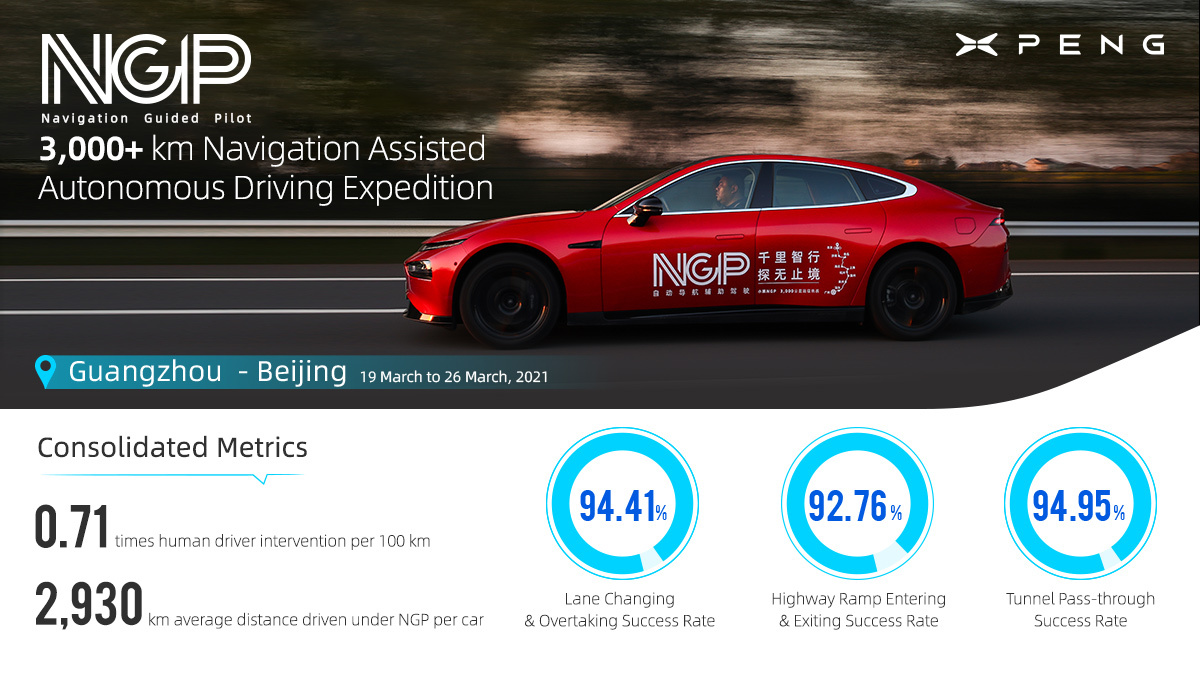 XPeng completed an 8-day test of its NGP autonomous driving system on its XPeng P7 electric vehicle last week. The result of a trip to 10 cities in China, with a total mileage of 3,675 kilometers, showed that 2,930 kilometers of them, the electric car was driven only by NGP with fully autonomous control. The intervention of a human driver was required on average 0.71 times for every 100 km of run.

The system performed consistently in heavy rain, tunnel and highway driving in mountainous areas, with an average success rate of 94.41% for lane change and overtaking.

Thus, XPeng P7 with NGP system set the record for the longest autonomous driving in a mass-produced car in China.

Regarding the global chip shortage issue, XPeng Motors VP Brian Gu, commenting on last quarter’s report, said the company sees no problems with these shipments, but will closely monitor the situation. XPeng has not reported any suspension at its plant.

Singapore-based research firm Canalys predicts that electric vehicle sales in China will total 1.9 million vehicles in 2021, up from 1.3 million in 2020. In total, they will account for 9% of all car sales in China, up from 6.3% in 2020.

Wedbush analyst Daniel Ives believes that consumer demand for EVs will remain robust and the current decline in manufacturer shares should be seen as a “short-term pullback in a multi-year uptrend.”

Ives predicts the electric vehicle market will be $ 5 trillion over the next decade.