The impasse in the OPEC + negotiations and the prospect of an increase in the oil deficit in the world market are pushing quotes up. The OPEC + alliance was on the verge of a split over the position of the UAE and could not even agree on a date for the next meeting to continue negotiations.

What will happen to the oil price if OPEC + fails to come to an agreement and if an agreement is still reached? Nikolay Dudchenko, an independent financial analyst, answered the magazine’s question.

The mood is pessimistic

– Currently, there is a deficit in the oil market. Economists point to a decline in inventories amid economic recovery after a deep phase of decline, and daily oil consumption exceeds production by about 1.5 million barrels. Thus, all attention is now riveted to the OPEC + meeting, but there’s a problem – to agree with the cartel on an increase in the production level by 400 thousand barrels per day in the period from August to December is not yet possible. The reason was the position of the United Arab Emirates, which insist on increasing their quota to 550 thousand barrels per day. We are all now seeing the consequences in the market – the price of Brent crude oil has exceeded $ 75 per barrel.

There can be only three options regarding the further decision of OPEC +:

The forecasts here are rather optimistic. Vice President of PJSC Lukoil Leonid Fedun said that the OPEC + countries will find an opportunity to agree, however, according to the entrepreneur’s forecasts, oil prices are unlikely to go beyond level $ 80 per barrel… The same opinion (that OPEC countries will be able to find a compromise) is shared by Reuters columnist Clyde Russell, who says that in this case, the trend in the oil market may most likely change to a bearish one. The optimistic scenario for the price movement assumes that the OPEC + deal will fall apart, and this will push the price up again. But here there are additional risks for developed economies and in particular for the United States, where we are witnessing the acceleration of inflation.

If energy prices continue to rise, the United States may even try to enter the market with its oil supply in order to try to stabilize the situation. Currently, America’s reserves are about 36.5 Gbbl – by the way, not that much, compared, for example, with Canada (169.7 Gbbl), Iran (158.4 Gbbl) or Russia (about 80 Gbbl).

Another option for the US to stabilize oil prices is to negotiate with Iran. Let me remind you that sanctions were imposed on Iran in 2018, but with the arrival of Biden in the US White House, the situation has changed somewhat. If a new deal is concluded, then, according to experts, this will lead to an increase in Iranian production by about 1 million barrels per day, but this will most likely only by the end of the year.

Thus, as regards the oil market, further medium-term expectations are rather pessimistic – the probability that the supply on the market will grow is too high. If so, it would be nice to know the levels to which the price can correct. To do this, you can traditionally use technical analysis to build a further model of price movement. 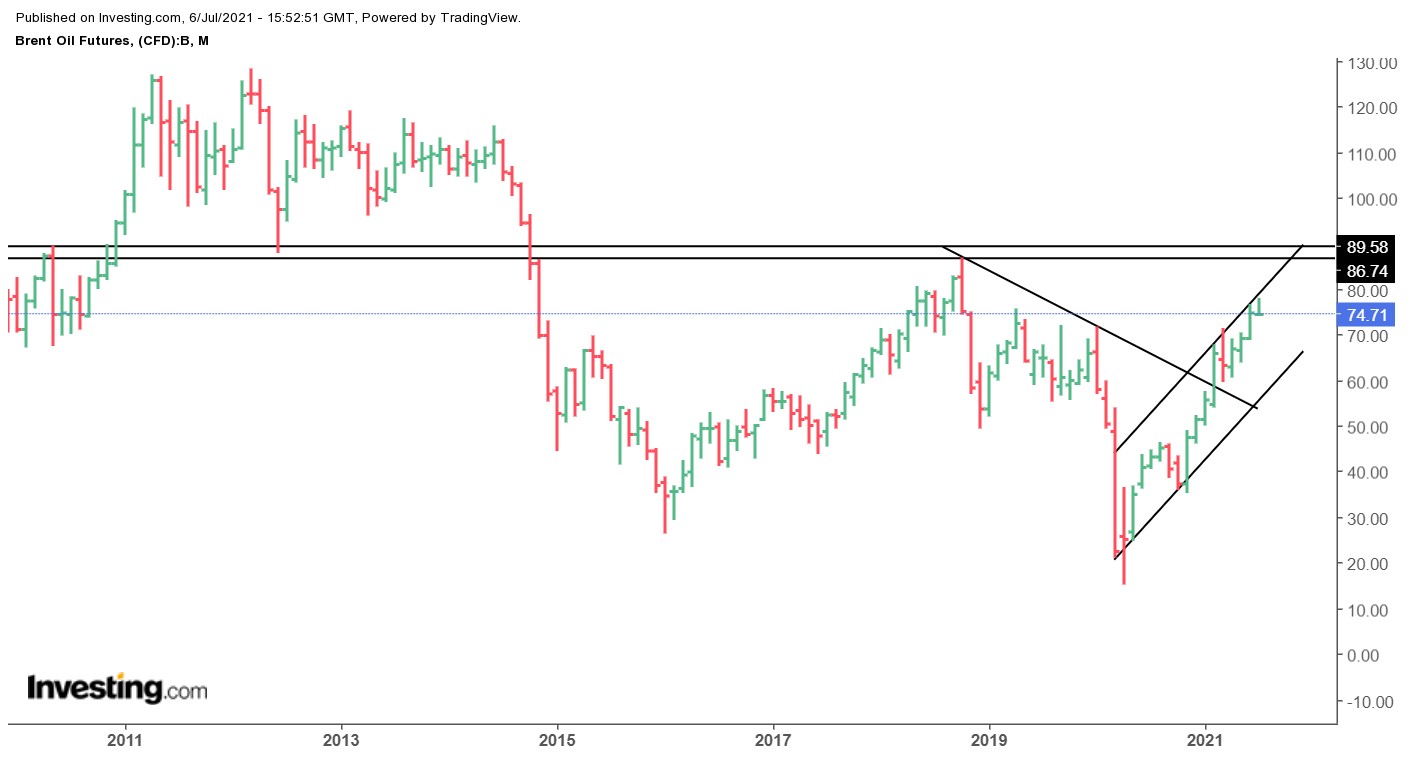 The oil price is in a bullish price channel with the boundaries of $ 58 – $ 80. Thus, in all likelihood, to overcome the $ 80 mark, i.e. in fact, it will be quite difficult for the bulls to get out of the channel upward. If this can be done, then the next resistance cluster will be the $ 86.7 – $ 89.5 range. The breakout of this cluster means that the price goes out to the $ 100 mark. Again, if the bulls can take these levels.

The price again managed to turn around and break above the 200th moving average. Indicators RSI and Williams% R “pulled” up following the price. At the same time, Williams% R is already in the “overbought” zone, which is again a preliminary signal for the bears.

In our review of the oil market from 04/09/2021, we gave one of the possible scenarios for the development of the situation, namely, the end of the third impulse wave at $ 71.38. As you can see now, from a technical point of view, this scenario turned out to be incorrect. So let’s revise our forecast:

Once again, we are considering the situation at 1M TF, which means that even if the scenario is correct, its implementation may take quite a long time.

conclusions: I would now rather expect a change in the bullish trend, so it is probably better to cover long positions in oil, or, at least, reduce.

Chicken broth for the soul. The most important. Part with the unnecessary and find that happiness was always there