Robinhood’s IPO on Nasdaq will be one of the most anticipated IPOs in 2021. The fastest growing broker plans to give its retail clients 20% to 35% of its IPO shares. Robinhood will trade under the ticker HOOD.

Robinhood Markets filed for an IPO on Thursday with the US Securities and Exchange Commission (SEC), the Form S-1 includes a nearly 300-page publicly disclosed report that will be read by both the regulator and investors looking to purchase shares of this fast-growing online broker. This is not Robinhood’s first IPO, and on March 23rd, the company filed a confidential S-1 filing with the SEC.

Online platform Robinhood revolutionized the stock trading industry by claiming to “democratize finance for everyone” and offering its clients zero commissions – a move that forced other larger brokers to do the same.

Today Robinhood derives 81% of its revenue from trade order flow – payments that the company receives from market makers (dealers) for directing trade deals to them, and the rest from premium paid services.

A feature of Robinhood compared to its other competitors among online brokers: Interactive Brokers, E-Trade, Fidelity, Charles Schwab, You Invest from JPMorgan (JPM), Merrill Edge, Ally Invest, Vanguard, TradeStation and others is the popularity of the Robinhood platform among young users and the extreme simplicity of its interface. The average age of customers on the Robinhood platform was 31 years as of March 31, 2021.

The exact date for Robinhood’s IPO, which will be one of the most anticipated IPOs this year, is not yet known. It is also unclear when clients of the platform will be able to invest in the upcoming IPO of Robinhood.

Robinhood said it plans to allocate a large 20% to 35% stake in its IPO to its retail customers. In May, Robinhood announced a new product, IPO Access, which allows ordinary users of its platform to invest in companies before going public. After an IPO, shares of already public companies tend to rise.

The Robinhood platform saw a huge growth spurt during the COVID-19 pandemic, as well as a boom in cryptocurrencies and crazy speculative trading in stocks like GameStop (GME).

In its S-1 filing, Robinhood published the following growth chart for client accounts. 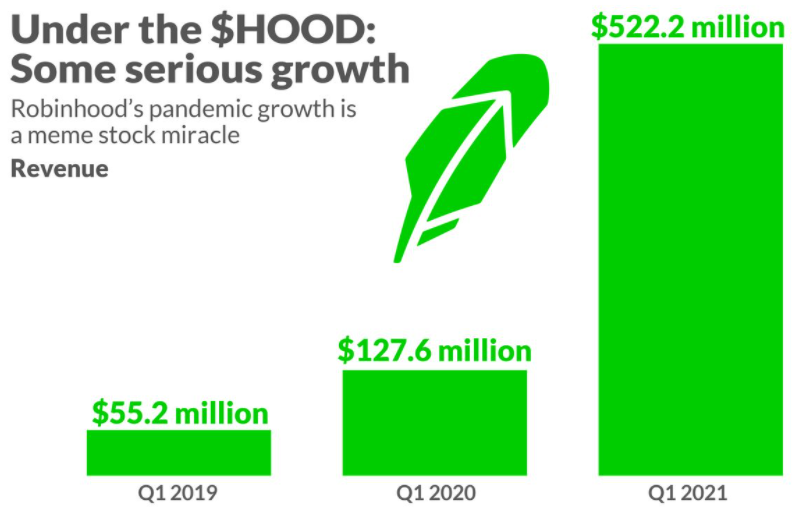 The annual growth rates of trading volumes for these assets are shown in the chart from the S-1 Robinhood application. 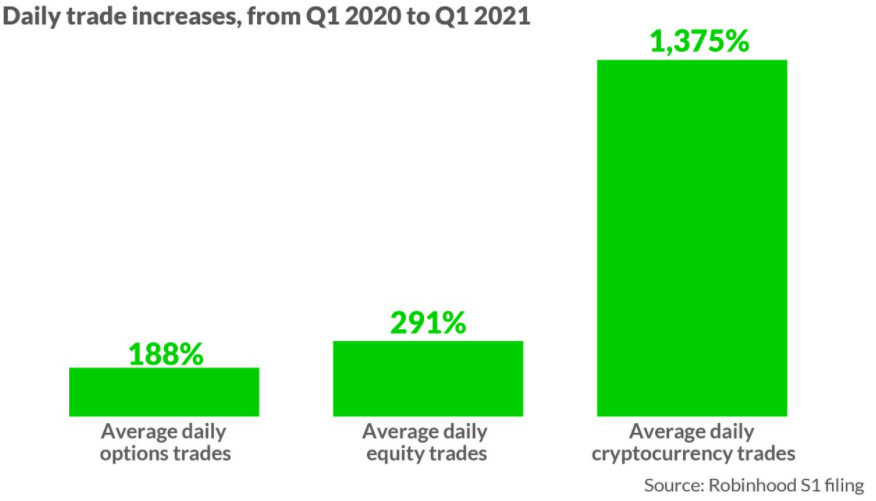 Robinhood also revealed that it has almost $ 12 billion in cryptocurrencies on its balance sheet, of which almost $ 4 billion may be in dogecoin, which is about 7% of all dogecoin coins currently in circulation.

Meanwhile, on the eve of S-1 filing, FINRA fined Robinhood a record $ 57 million and ordered the company to pay nearly $ 13 million in reimbursement to thousands of customers “for system-wide blackouts and misleading communication and trading practices.” FINRA regulates member brokerage firms and the US exchange markets.

In addition to the risk of repeating the company’s previous mistakes, Robinhood investors must understand risks such as:

However, the fact that Robinhood goes public will entail a commitment to be more open and honest in providing truthful information to its investors and clients.

For more information on the pros and cons of investing in Robinhood Marketinfo.pro wrote in the article “Robinhood Confidentially Filed an IPO – Should You Buy Stock?”

General Motors sales up 40% in the second quarter, but below estimates