After the reorganization of Google into Alphabet, its shares continued to trade on the NASDAQ stock exchange. Very often novice investors are surprised to learn that these shares have two exchange tickers – GOOGL and GOOGand get lost, not knowing which one to choose. This is not a typo, just stocks belong to different classes. What is the difference between these Google promotions?

If you look at the stock chart of GOOGL and GOOG shares, it becomes clear that the difference in price between them is small. What then is the point of dividing them into some classes?

The division of the company’s shares into classes was carried out so that the co-founders of the company retain the greatest degree of control over it.

What is the difference between Google shares of different classes?

As a result of the 1-to-1 split in 2014, the number of Alphabet shares doubled, and their price, respectively, halved. The shares obtained by splitting received a fundamental difference:

Due to the fact that GOOGL shares (class A) give the right to vote at shareholders’ meetings, their price on the market is always slightly higher than that of GOOG shares (class C). The exchange rate difference between them fluctuates, but it always exists. 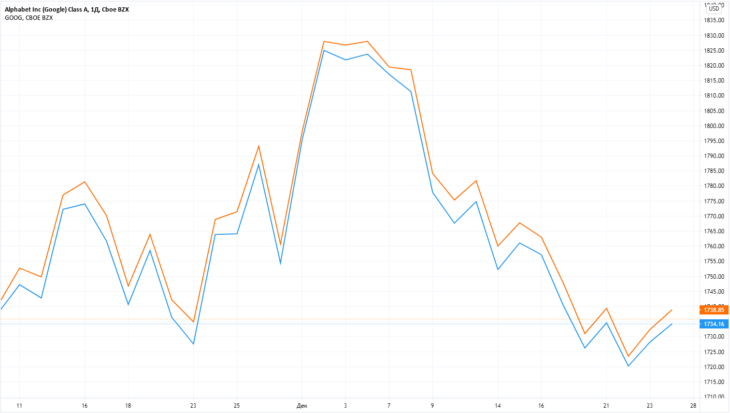 Exchange rate difference between the price of GOOGL and GOOG shares

The number of Alphabet shares of different classes is not constant. Google plans to issue GOOG (Class C) shares to reward its employees.

The number of class B shares is not static either. Their holders periodically convert shares into classes traded on the stock exchange and sell them. For example, in 2015 Sergey Brin converted 48,998 Class B shares into Class A (GOOGL) shares for sale. Accordingly, the weight of his vote at shareholder meetings was proportionally reduced.

Ultimately, it doesn’t really make much difference to the average investor which Google stock to buy. If you do not plan to attend shareholders’ meetings and vote with your shares, then GOOG shares (class C) are suitable for investments. And if you have serious plans for the development of the Alphabet holding and you are eager to share them with the rest of the shareholders, then it is better to choose GOOGL shares (class A).

Interest in real estate abroad may increase by 30% in 2021

US Senate to Consider Trump’s Impeachment