Gold is a particularly interesting asset during a crisis


Golden time of crisis. Here’s how 2020 can be characterized for the gold market. Unsurprisingly, back in November 2019, the price dropped to $ 1,487 an ounce, but an infected bat from China was able to carry it to almost $ 2,100 an ounce in just a year. Those. the price increase was more than 40%. Not a bad investment for those who bought this precious metal two years ago. However, as you know, in hindsight, everyone is strong. It is quite a logical question: what to do next? Let’s try to analyze the situation, focusing on the global economic picture and technical indicators.

One of the key factors that can affect the price of gold in the long term is the outrageous growth of the money supply and stock / cryptocurrency bubbles. Consider what’s going on.

We are currently seeing an unprecedented picture in the American market. Growth is taking place in almost all sectors, while the growth in companies’ revenues does not correspond to the growth in capitalization. Consider, for example, the FAANG stock:

As you can see, most companies have a P / E ratio (payback period) above 25. In simple terms, having invested money, for example, in the same Apple at current prices, it will take about 38 years to return it. The growth in the capitalization of the iPhone manufacturer is more than 10 times higher than the average revenue growth for 3 quarters of 2020. How not to talk about complete separation of market valuation from economic reality… And this, alas, concerns not only FAANG companies and not only the developed American economy.

Where is the money?

How does this inflation of markets take place on the example of the United States? It is based on two well-known and discussed factors:

First is monetary support in the form of frantic pumping of additional liquidity (QE) to companies at extremely low interest rates. As you can see from the graph, the Fed’s balance sheet currently exceeds $ 7.4 trillion – an absolute historical record.

Secondly, this state support of the population, which according to various estimates should reach 5.2 trillion US dollars. Where does the government’s air money go? Of course, for consumer needs, which again contributes to the growth of corporate revenue. In addition, money simply flocks to the financial and cryptocurrency markets. For example, the well-known platform Robinhood has significantly increased its client base in 2020, opening more than 3 million new accounts (more than 30% of new users). In August 2020, Forbes, citing Goldman Sachs, reported a 129% increase in options trading. Well, how can we not remember Selena Gomez and Richard Thaler, who play Black Jack in the well-known film “Shorting”. There, however, it was about CDO, but the essence is about the same. Markets are simply swelling due to the influx of “helicopter money” and synthetic financial instruments.

Cryptocurrency is not far behind. Starting from April 2020, Bitcoin has begun its ascent again, and by January the price reached a historical maximum. The capitalization of the entire cryptocurrency market from October 2020 to January 2021 grew from $ 337.5B to almost 1.1 trillion, i.e. 2.3 times or more than 200%. Thus, we are dealing with an incredible bubble that continues to swell. Skeptics who are now making money from the growth of the crypto or stock market believe that the bad times will never end, but the fact is that even the best things also come to an end. The end of this great bull market is covered in one simple word – inflation…

The rise in inflation should inevitably lead to an increase in rates and a reduction in stimulus measures. In this case, the question of what will happen to the markets becomes rhetorical. Many may argue that, for example, bitcoin will become the refuge where capital will go after the transition of developed economies to a restrictive monetary policy. However, I would still question this.

In the current environment the growth potential of the gold price is quite limited… It is not for nothing that analysts draw attention to a strong decline in demand from institutional investors and to an increase in demand from industry. In our review from 12/03/2020, I said that it is hardly worth waiting for the $ 2,000 per ounce mark to be exceeded in the near future, and I think that 2021 may not be the best year for gold, however, in the long term, I would continue consider this metal as a promising investment. Gold is just now the case where such colossal market overheating is not felt. 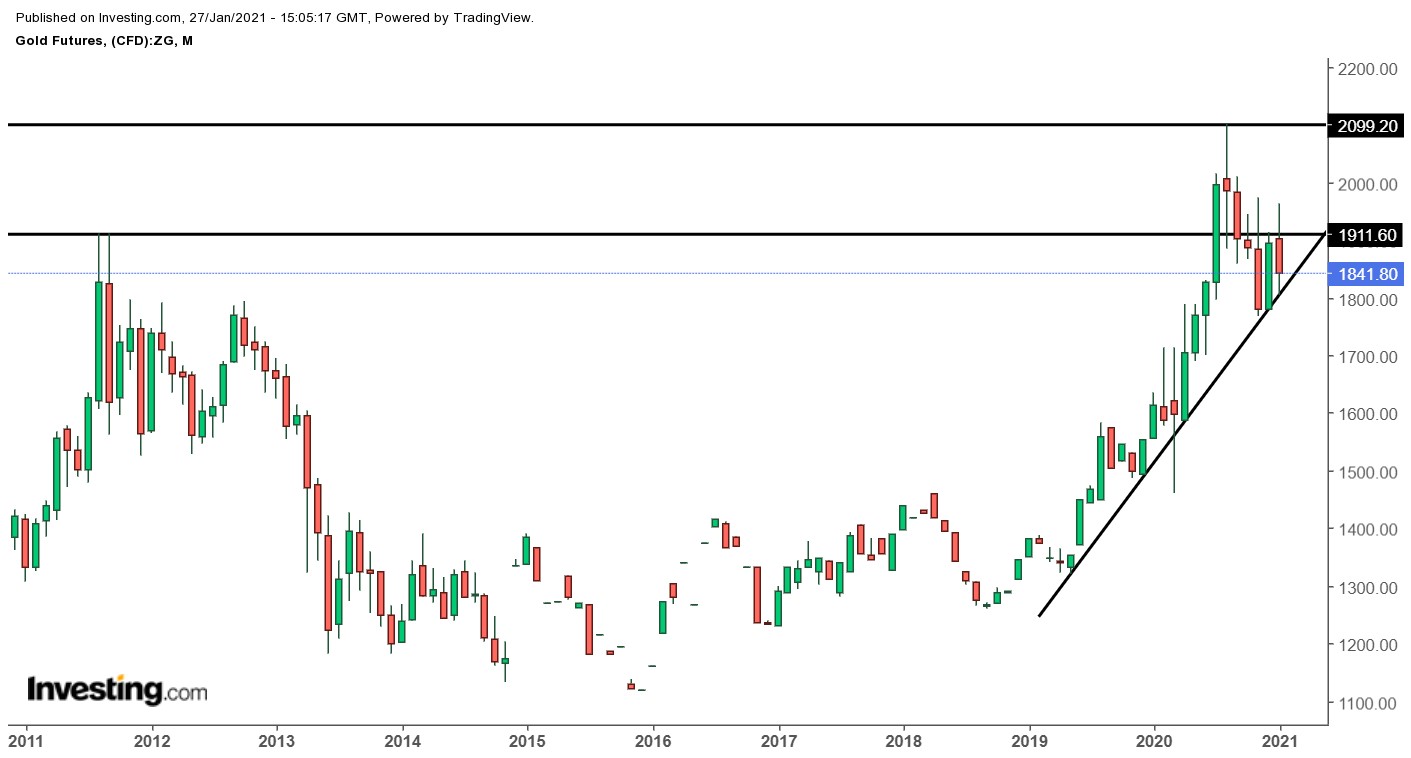 The 200 moving average is rising, confirming the bullish trend. The MACD and RSI indicators generated sell signals. At the same time, I would not really trust the signals yet, at least until the breakdown of the trend line ($ 1800 level). 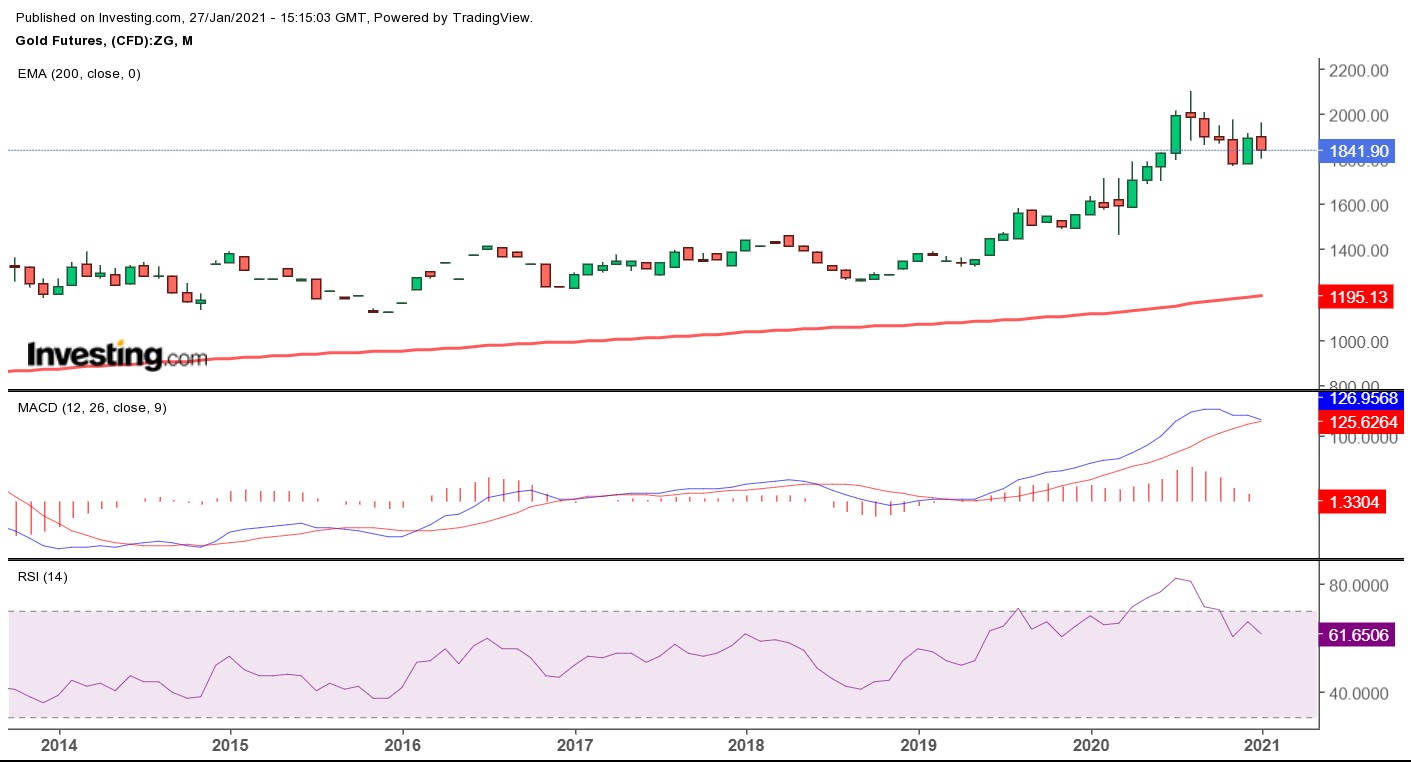 Here, as always, several scenarios for the development of the situation are possible. I will make a reservation right away that we will consider all the options for the development of events at 1M TF, which means that the implementation of any of the scenarios listed below may take some years… At the same time, it is possible to make a decision about what to do in the near future on the basis of certain markers, which we will call “scenario testing”.

Gold price is in trend momentum: 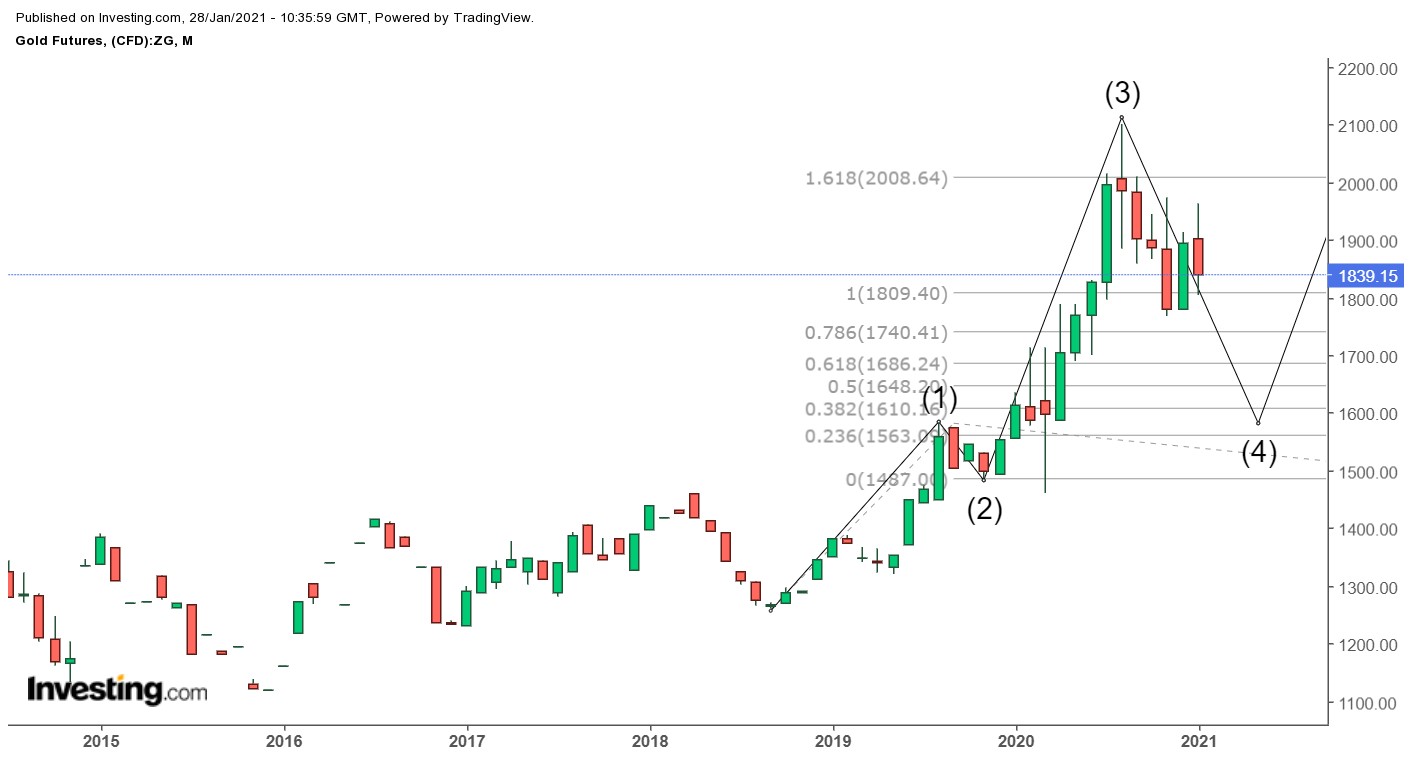 The price has almost completed the formation of the trend impulse, and we have already seen the end of the fourth wave ($ 1,767.20 minimum). In this case, in the near future we will have to observe a reversal and growth, followed by the formation of the fifth final wave of the impulse. 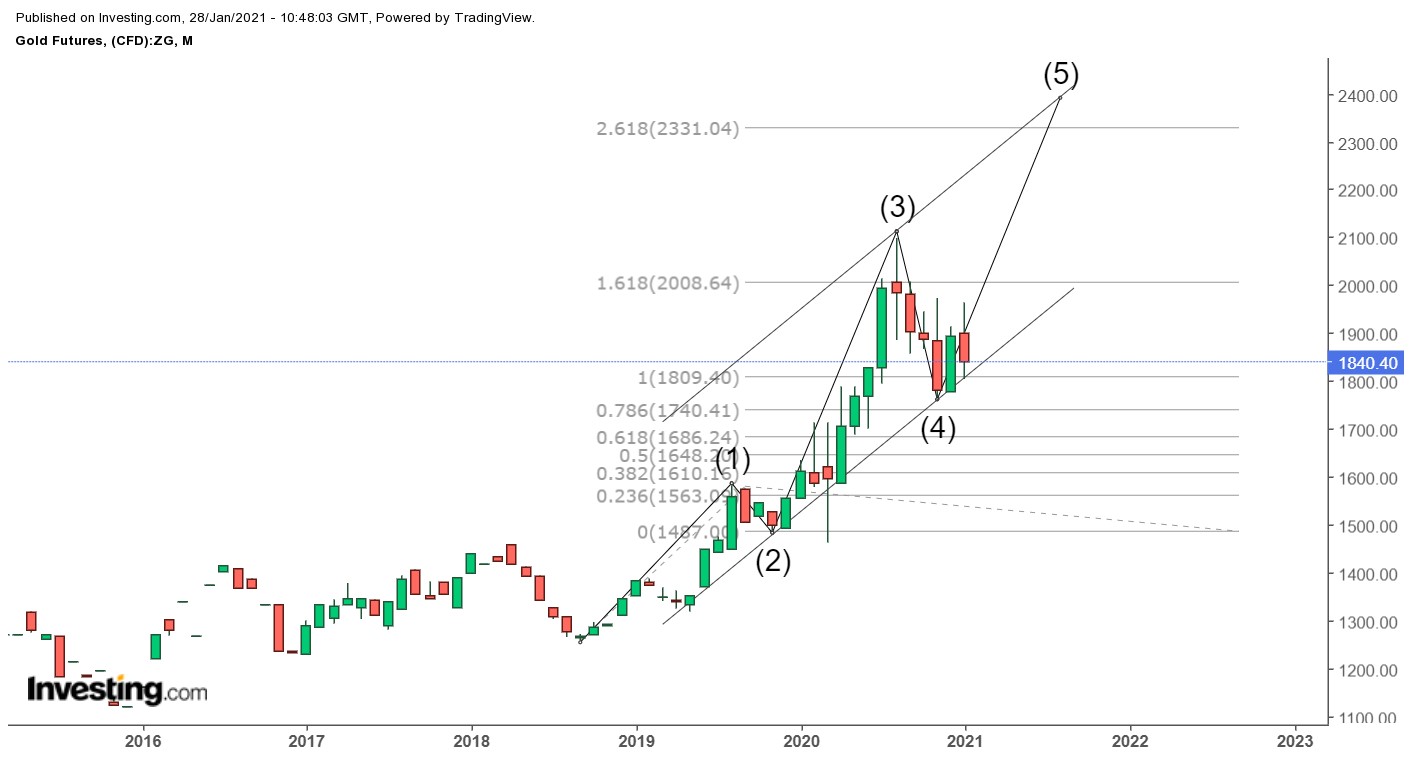 The price is in trend momentum. The third wave begins to form. If so, then the wavelength should be at least wave 1. Thus, the target of such a movement should be the level of $ 2595 per ounce. This scenario should be confirmed by the breakdown of $ 2083.50. 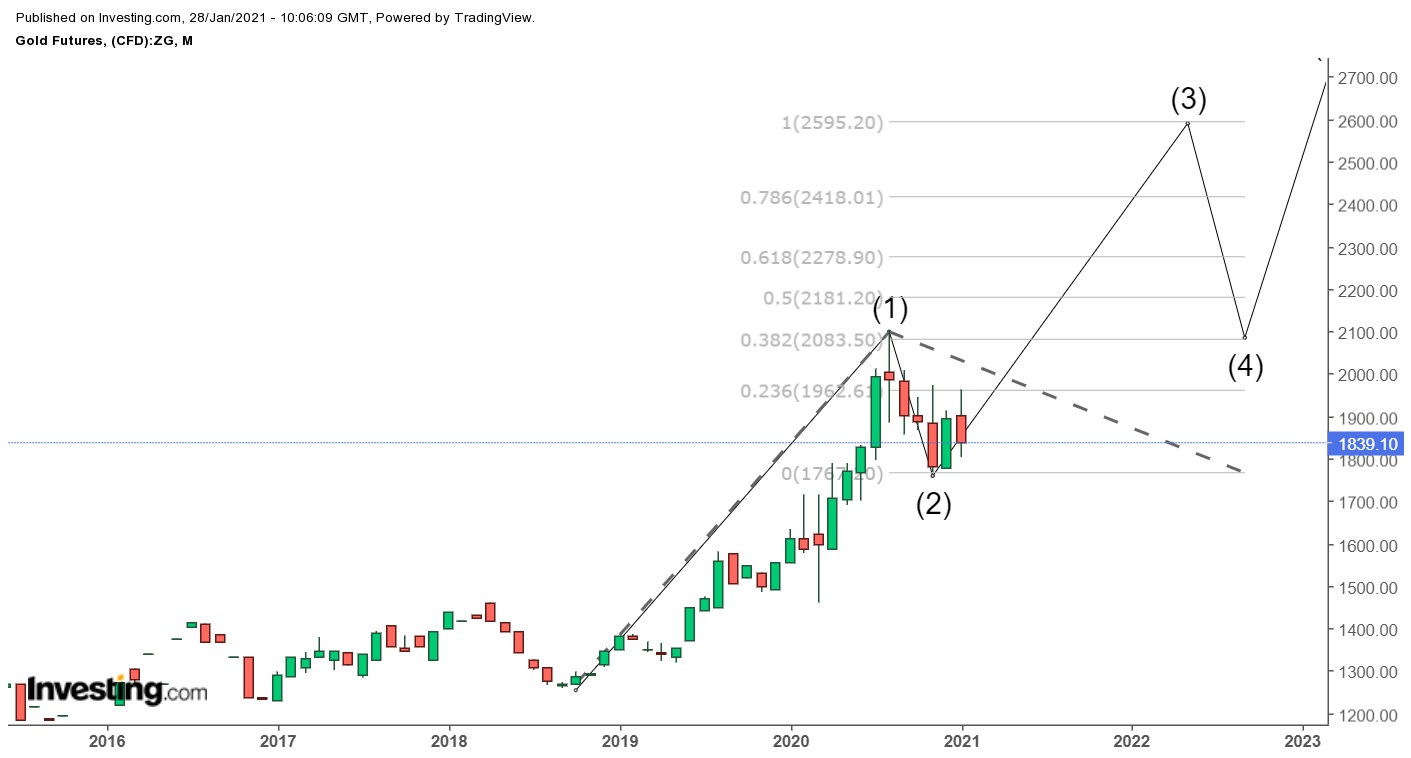 In this scenario, the price completed its impulse formation in August 2020 and we are currently seeing a corrective wave. Here the variability can be huge. For example, the formation of a deep corrective ZigZag with an internal structure of 5-3-5 (ie, five waves of decline, then three waves of growth and again five waves of decline). In this case, we can see a rather deep price drawdown.

Conclusions on the gold market

From a fundamental point of view, I see no reason for a strong decline in the price of gold. Economic recovery will boost industrial demand, but investors will certainly choose to ignore gold in this case, at least until deflation ends.

More interesting articles in the 127th issue of Fortrader magazine