Facebook’s holiday quarter has been strong, but there are risks for ad targeting

Facebook shares declined after the release of their holiday quarter financials despite 52% growth in earnings per share and 33% growth in earnings. Facebook expects the privacy changes in Apple’s iOS 14 could hurt its ad business.

Facebook (FB) shares, which have gained 25% in the past 12 months, are down following the release of their fourth quarter report ending in December and forward-looking statements.

Facebook has benefited from high engagement and growth in active users, as well as a surge in online commerce during the holiday months. The COVID-19 pandemic has pushed people around the world to chat and shop online more frequently.

At the same time, Facebook CFO David Wehner warned that a potential “slowdown or change in one or both of these trends could be an obstacle to the company’s advertising revenue growth.”

Facebook executives are also concerned that at the end of the first quarter, the company’s apps may experience “serious obstacles to ad targeting.”

Changes may follow Apple’s iOS14 software update (AAPL), which will change user privacy settings. According to a press release from Apple, the updates will be released this spring.

Facebook criticized Apple’s move because it would hurt small entrepreneurs relying on ad targeting, and the company also called Apple “one of its biggest competitors.”

Facebook executives also warned of a “changing regulatory landscape” this year as US and EU authorities are conducting antitrust investigations into Facebook acquisitions that threaten to split Facebook, Instagram and WhatsApp into separate companies.

Research firm EMarketer estimates that Instagram accounted for 49% of Facebook’s ad revenue in the US in 2020.

Revenue grew by 33% and amounted to $ 28.07 billion, which is higher than the average analytical estimate of $ 26.29 billion. Statistics of quarterly revenues and profits of Facebook for the last 2 years are available here.

While Facebook derives most of its revenue from digital advertising, the company noted that its “Other” revenues in the fourth quarter rose 156% year-over-year to $ 885 million, representing more than 3% of Facebook’s revenue for the quarter.

“Other” revenue includes sales of Oculus virtual reality headsets and Portal video chatting devices, which have grown during the pandemic.

The audience of the “app family”: the main application of Facebook, Instagram and WhatsApp has reached 3.3 billion people.

The number of global daily active users (DAU) was 1.84 billion, higher than the 1.83 billion predicted by analysts.

The user base in Europe increased to 308 million DAU per day, the first growth in the region after three quarters to 305 million.

The number of monthly active users (MAU) was 2.8 billion, also higher than the forecasted 2.76 billion. 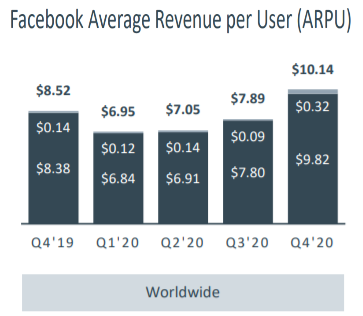 As of December 31, 2020, Facebook has a high balance of cash, cash equivalents and circulating in the securities market – in the amount of $ 61.95 billion.

The company increased its staff by 30% and at the end of the year the number of Facebook employees was 58,604 people.

Following the scandal that Donald Trump supporters used Facebook platforms to coordinate the storming of the Capitol and then block the former president’s account, CEO Mark Zuckerberg recently announced that the company will work to limit political discussion on its social media, including refraining from encouraging people to join political Facebook groups.

SpaceX in a new round of funding could reach an estimate of $ 60 billion.