Experts predict an increase in oil prices in 2021


2020 has become a significant challenge for the oil market. Industrial production in most developed countries collapsed:

We have all witnessed what this has led to in the oil market. It was storming so that the price of futures contracts flew below zero. But now everything seems to have calmed down. Business activity in the manufacturing sector returned to normal, and Brent began to grow slowly but surely.

The question now is what to expect next? Let’s try to figure it out.

It’s no secret that the price of any asset on the market is determined by supply and demand for this asset. Let’s evaluate possible scenarios of price behavior taking into account these factors.

According to experts, the drop in oil demand in 2020 may amount to about 8.4 million barrels per day (recall that world oil consumption in 2019 was about 100 million barrels per day). On the other hand, according to the estimates of the Organization for Economic Cooperation and Development, as well as the IMF, the drop in world GDP in 2020 should be about 4.4-4.5%. Those. the fall in oil demand is twice the decline in the global economy. This is understandable given that, according to some estimates:

COVID-19 has hit all of the above sectors. Global lockdowns have led to a decrease in the use of all modes of transport, but as for industrial production, we have already discussed this above.

If we consider separately the history of growth in oil demand relative to the dynamics of growth in world GDP and the price of Brent crude oil, we get the following picture:

As you can see, the growth or slowdown of the world economy is not always accompanied by an increase in demand and oil prices (the IMF, by the way, drew attention to this in its research in 2017), however, nevertheless, this happens quite often. As a result, we can assume that if the forecasts for global economic growth in 2021 are correct (growth is expected by about 5-5.5%), then with a certain degree of probability we will see an increase in oil prices…

Demand can also be supported by weather conditions. Traditionally, in the winter (heating season), the demand for oil grows.

One of the key factors determining the supply of oil in the world is the actions of the OPEC member countries. And here I would like to draw special attention to what the oil price is comfortable for the key oil economies that are part of the cartel: Saudi Arabia, Iraq, UAE, Kuwait and Iran:

Thus, on average, these countries benefit from oil prices in the region of $ 61 per barrel.

Let me remind you that at the last meeting the countries of the cartel agreed on some concessions: production will be increased in such a way that by April the volume should increase by about 2 million barrels per day. I see this as a signal that OPEC is positive about the market situation.

In the last week of December, a number of large investment companies published their forecasts for the oil market.

Those. most analysts still expect rise in oil prices and shift their estimate towards $ 60 per barrel of Brent crude.

Here, however, it is necessary to make a reservation that the assessment of the oil market is quite different. While the “investment companies” have this assessment more positive, other organizations are more cautious in their forecasts. The American EIA predicts finding oil near $ 50 per barrel, Moody’s is more pessimistic and announces a range of $ 45-47 per barrel in 2021.

If you do not consider COVID, which, of course, continues to be the main risk factor for all markets and all economies of the world, then for the oil market, the huge reserves accumulated in storage facilities during the crisis became another such factor. Here, however, we can turn to the OPEC study. The cartel said that between the second and the end of the third quarter of this year, total oil reserves fell by about 250 million barrels. In the latest survey for December, the cartel also noted a decline in oil reserves in October. The American EIA confirmed a positive outlook for a reduction in inventories in connection with a possible subsequent increase in demand for oil.

Now let’s move on to the technical analysis of the market price.

A local bullish trend is currently forming on the monthly timeframe. Further continuation of growth largely depends on whether the price succeeds gain a foothold above $ 50 per barrel… If this happens, then the next target that the price will need to overcome is the $ 55.5-56 mark.

In keeping with the simple concept of measured movement, an upside target can be determined by measuring the distance from the start of the trend change to the first correction and projecting the same distance from the start of the upward continuation. In our case, the reversal of the global trend and growth occurred in March-April this year. After the start of the second wave and the correction in September-October 2020, the growth continued. Thus, using the measured movement, it is possible to define a technical target at the level of $ 62.4, which generally corresponds to the fundamental estimates of individual experts, which we spoke about above. 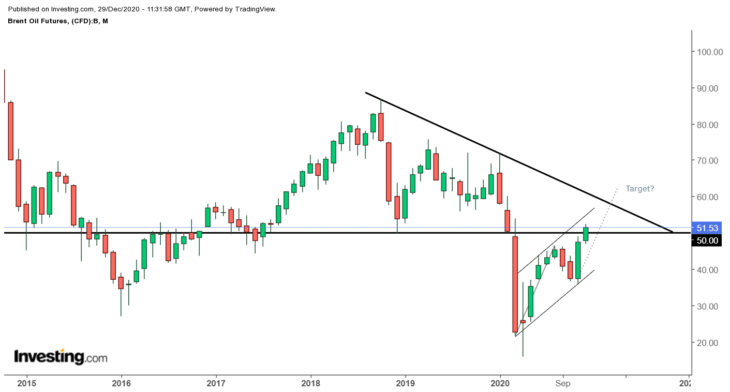 The 200th moving average is directed sideways, confirming the presence of a flat. The RSI and Stochastic indicators confirmed the reversal and gave a buy signal back in April-June 2020.The RSI will slightly determine the Stochastic Oscillator, but in general the signals were accurate. Judging by the moving average, the target may be the $ 63 level, which is close to the level given by graphical technical analysis. 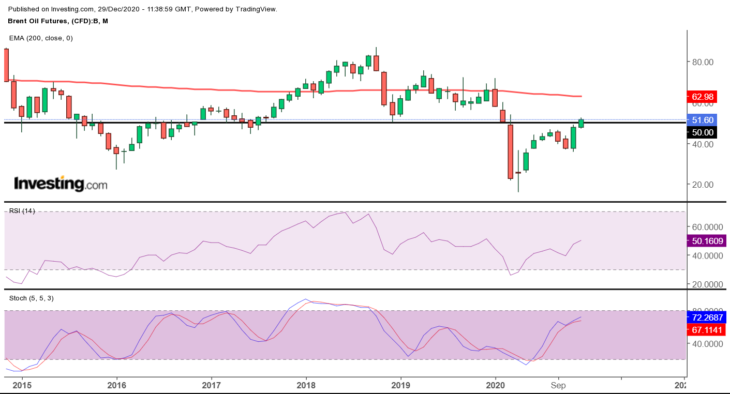 Here, everything is somewhat more complicated, since the variability is significantly higher, which gives much more space for imagination. I am inclined to adhere to the following scenario: the correctional wave that began in June-July 2014 continued until March 2020. If the correctional wave is over, then according to the wave theory, we are again dealing with a classic impulsive 5-wave structure. And if so, then the picture may look something like this: 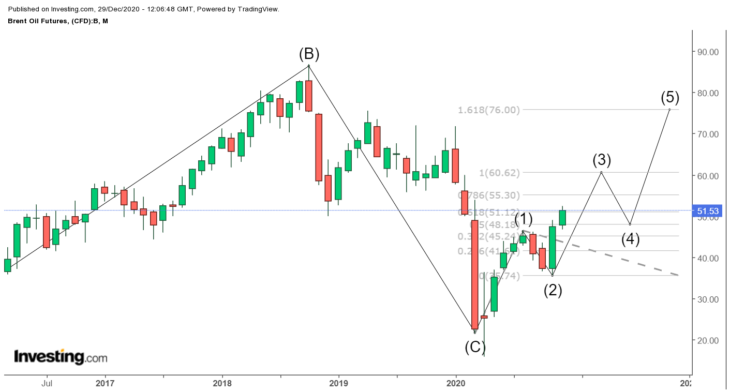 Conclusions on the oil market

My view on the oil market is moderately optimistic. Based on macroeconomic and technical factors, there is still room for growth. I do not expect that next year the price will be able to gain a foothold above the $ 60 mark, but reaching this value is quite likely.

Bulls in EURUSD are trying to seize the initiative