Cryptocurrencies and other investment projects


A few years ago, cryptocurrency assets were not seriously considered by anyone as serious competitors for other investment instruments (in particular, gold and stocks). 2020 forced us to look at the situation from a different angle – the crypto market capitalization exceeded the previous record by more than 100%, and large players and corporations paid attention to digital assets.

Market volumes: where are the main capitals concentrated?

The market capitalization of the cryptocurrency market peaked on February 21, 2021, at $ 1.765 trillion. With this metric, crypto assets could be among the top three companies by capitalization, but Apple ($ 2.1 trillion) or Saudi Aramco ($ 2.05 trillion) alone are worth more than 8,675 digital assets combined.

If we talk about the gold market, perceived by investors as a “protective mechanism”, then according to the resource Gold.org, the total market capitalization in 2021 reached 10.9 trillion dollars. Compared to the peak value of the crypto market, the lag is still noticeable, but not so significant.

The stock market still holds the palm. At the end of 2020, the capitalization of the global stock market for the first time broke the psychological mark of $ 100 trillion, $ 13 trillion more than global GDP.

If you look at the diagram, the cryptocurrency market cannot be called a full-fledged competitor to gold or stocks in the struggle for the attention of investors, but the study of capitalization does not provide an opportunity to assess the full picture. The instruments appeared at different times, so their prospects can be traced by their growth rates.

Growth rates of the stock market, gold and digital assets 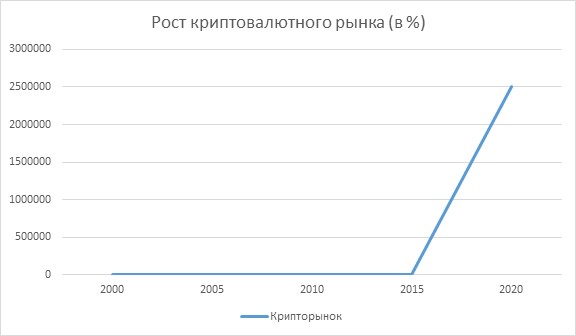 The stock market originated in the 17th century, and stock exchanges trace their history back to the 18th-19th centuries. If you look at the indicators of the new millennium, then since 2000 the capitalization of the world stock market has grown from 30 to 100.4 trillion (346%).

The cryptocurrency market appeared in 2009. Rather, Bitcoin appeared this year, and the crypto market began to form directly in 2012-13, when competitors began to appear for the first cryptocurrency. In April 2013, the market capitalization was only $ 68 million, after which it began to grow rapidly. For 7 years, it has reached the figure of 2,500,000%. On the chart, the growth of investment instruments can be displayed as follows: 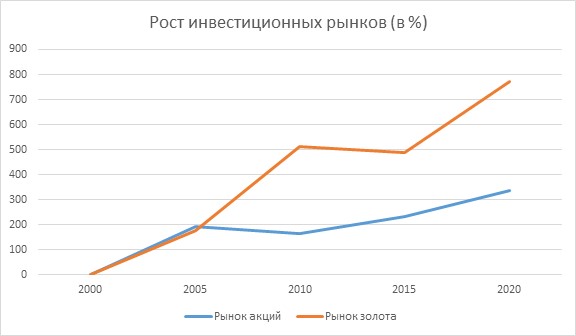 Early investors earned millions of dollars on cryptocurrencies, and the continued growth of digital assets attracts more and more market players, stimulating the further development of the sector.

Growth of investment instruments in 2020

If we analyze the indicators of 2020, the cryptocurrency market will also benefit.

In the cryptocurrency market, capitalization increased by more than 400% over the year. Analyzing the performance of individual cryptocurrencies from the top 10 rating, the most rapid growth was demonstrated by the Cardano cryptocurrency (4333%).

However, cryptocurrency assets have their own pitfalls, which are important for investors to familiarize themselves with. Volatility is not the main flaw in the market. More than 8,600 digital assets have already been issued, according to Coinmarketcap, and not all of them are of value. Some projects are an opportunity to make money on the massive hype, so the investor should invest only in assets with high liquidity. How do I find them? We need reliable trading platforms.

The pound / dollar pair has not yet decided on the trend – ForTrader.org financial magazine