The euro rate continues its rapid recovery, consolidating above the psychological level of 1.2000. The ECB failed to ease the bullish sentiment of the market: as expected, the regulator kept the current soft monetary rate, noting that the economy was growing too slowly. Thus, the indicators of business activity in the services sector (Markit Services PMI) overseas again turned out to be better: 63.1 points against 50.3.

At the same time, investors’ appetite for risk continues in anticipation of soft rhetoric from the Fed at its meeting on Wednesday. The statement is fed at 21.00 Moscow time and may become fateful for the American currency: the dollar index is under pressure for the fourth week in a row, risking falling below psychological 90 points.

Thanks to the easing of tensions on the Donbass issue and the actions of the Bank of Russia, more and more investors are returning to ruble-denominated instruments. The Ministry of Defense of the Russian Federation announced its readiness to return the armed forces to their places of permanent deployment after the completion of the exercises before May 1, which led to a sharp decrease in the premium for geopolitical risk in USD / RUB and EUR / RUB quotes. Against this background, the national currency strengthened to the levels of 75 and 90 rubles per dollar and euro, respectively, and the Russian state market. debt began a long-awaited recovery (RGBI index added 1.67% from the lows of April).

Additional support for the ruble was provided by the regulator’s decision to raise the key rate by 50 basis points at once to 5%. The Central Bank of the Russian Federation noted the strengthening of inflationary risks and announced its readiness to further increase in order to contain the rise in prices. This was a signal for carry trade investors to increase their ruble position.

The USD / RUB pair has formed a local downward reversal from the resistance of 77 rubles and is aimed at 73 rubles per dollar. 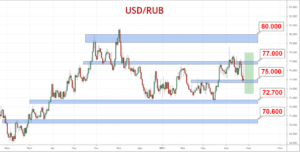 The EUR / RUB pair was unable to develop growth above 94 rubles and has more chances to take a course to support 88.5 rubles – 90 rubles.

Watch the latest video analysis every day on the Alfa-Forex channel.