A very rare candlestick pattern has formed on the gold chart

Gold quotes are consolidating around $ 1875 per ounce.

At yesterday’s trading, the instrument was actively fluctuating, reflecting the high volatility in the USD Index. The US Senate passed a $ 900 billion stimulus package after much debate. Along with it, the budget for 2021 received approval, and in the near future it can be expected that volatility on global markets will return to normal.

The negative impact on the quotes of the metal had an unexpectedly rising yield on US government bonds. At yesterday’s auction, short-term 6-month and 3-month Treasury bills were placed at 0.090% and 0.090%, respectively, which is higher than the rates of the previous placement at 0.085% and 0.075%. Long-term Treasury bonds with a maturity of 20 years were placed at 1.470%, which is higher than 1.422% at the previous placement. 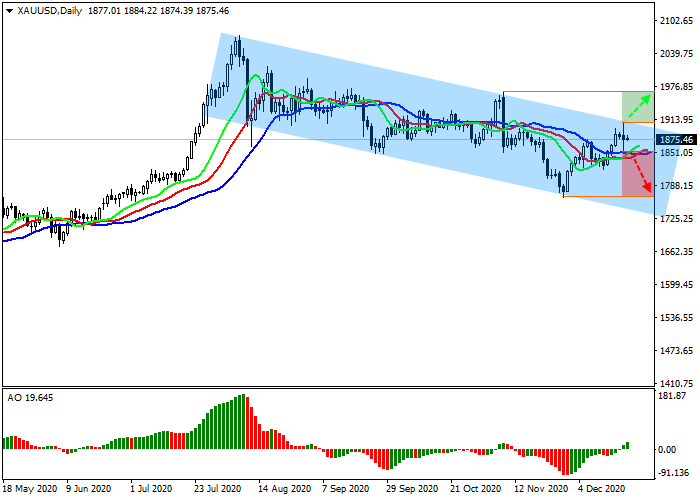 Asset quotes move within the global descending channel, forming a rare candlestick pattern “volume candlestick”. Technical indicators have issued a new buy signal, but it is still weak. Fast EMAs of the “alligator” indicator are above the signal one, and the histogram of the AO oscillator has moved into the positive zone.